The sad story of a child in conflict.

The sad story of a dead child in conflict by Barry Shaw. 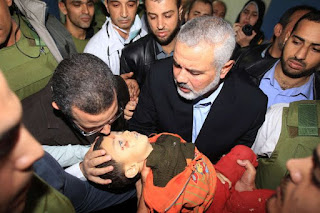 Have a look at this distressing picture. It portrays a small dead child being carried by Hamas leader, Ismael Haniah, and kissed by the Egyptian Foreign Minister Kandil, in Gaza.
The media, in their rush to judgment, claimed that the child, Mahmoud Sadhala, was killed by an Israeli air strike near his family home. CNN carried a video of the child being carried into the hospital where Haniah and his Egyptian guest were visiting. CNN reporter, Sara Sidner, visited the child’s family home and interviewed the parents. She pointed out the property damage, and spoke repeatedly about planes and air strikes.


But there is one thing wrong with this image. The child was not killed by an Israeli air strike. Mahmoud Sadhala was killed by an errant Hamas rocket.
There have been at least seventy Hamas rockets that have fallen within the Gaza Strip, according to the IDF tracking teams, during the crazed Palestinian rocket frenzy on Israeli civilians. Some of them were badly aimed or faultily constructed causing Palestinian civilian casualties and death. Mahmoud Sadhala was one such victim.


Neighbours say that about 9.45 a.m., an explosion hit the doorway of a house killing 20 year old,  Aidan Abu Wahdah, and 4 year old Mahmoud. They said the explosion wasn’t powerful enough to have been from an Israeli war plane. It needs to be added that Israel refrained from air strikes during the period that the Egyptian Foreign Minister was visiting Gaza. This was the period that Mahmoud was killed. Hamas and other terror groups did continue their rocket attacks on Israel. The shrapnel damage that was filmed before Hamas security officials mysteriously took the pieces away was identical to the shrapnel damage of Hamas rockets fired into Israel.
The Telegraph newspaper confirmed that the child had been killed by a Hamas rocket;


Undoubtedly civilians on both sides suffer terribly in war, but Israel has been forced to fight a war not of its choosing but in response to incessant rocket strikes from Gaza that left little Mahmoud Sadhala as one of its sad victims. He should not have been used as a propaganda ploy by those responsible for his death.
Posted by Unknown at Sunday, November 18, 2012

The enemies of Israel and America will stop at nothing to deceive the masses. And the masses will simply not do their due diligence to discern truths; they rather hear it from the local liberal news groups, with all their distortions. Hosea 4:6 My people are destroyed for lack of knowledge: because thou hast rejected knowledge, I will also reject thee, that thou shalt be no priest to me: seeing thou hast forgotten the law of thy God, I will also forget thy children.