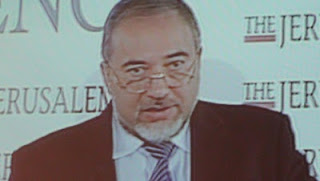 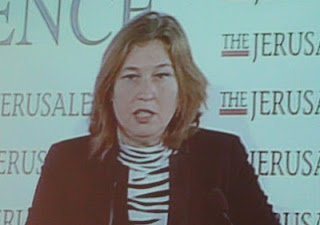 Liberman-Livni. Parallel lines.
I was invited to the Jerusalem Post Diplomatic Conference in Herzlia on December 12, 2012.

It turned out to be a special moment in Israeli politics when straight-talking Avigdor Liberman, Israel’s Foreign Minister and smooth-talking Tzipi Livni converged in demanding that international diplomats and politicians get their perspectives right when approaching Israel’s conflict with the Palestinians. Although each have differing positions on the Israeli political landscape, they united in criticizing the diplomatic world for their one-sided attitude that encourages rejectionism and extremism on the Palestinian side and unjustly isolates Israel.
There was no advance coordination of their message as Liberman left before Livni arrived.
Livni appealed to the attending diplomats that “it should be part of the understanding that a secure Israel is in the interest of the international community, and not just our own interest. While it is true that there is criticism over Israeli policy, this must be separated from the support of Israel as a state.”
She reminded that the wrong condemnation of IDF actions against Palestinian terror restricts our freedom of movement leading to disgraceful scenes where Israeli soldiers are ordered not to fire at rock-throwing mobs. She also criticized diplomats for not doing enough to bring the two sides back into negotiations and for not condemning Hamas rocket attacks on Israeli civilians.
Avigdor Liberman was more scathing accusing the international community of duplicity. “When push comes to shove, many world leaders will be willing to sacrifice Israel without batting an eyelid in order to appease the radical Islamic terrorists and to ensure quiet for themselves.”
Expressing his disappointment at the European stance in supporting, or merely abstaining from, the Palestinian resolution at the UN for non-member status, he said, “My sense is that all the promises and commitments to Israel’s security is mere words. Despite clear announcements by Hamas leaders that they will never accept or respect any agreement with Israel and their intention to destroy Israel, the Europeans decided to place pressure only on our side.”
Liberman reminded the audience of past European commitments to protect Czechoslovakia in 1938 and the pressure put on the Czech government to partition Sudetenland. After all the promises and guarantees that were provided, Nazi Germany occupied all of Czechoslovakia bringing an end to its existence at that time.
“We are not willing to become a second Czechoslovakia,” Liberman told the diplomats. “We are not willing to compromise Israel’s vital national interests.” Reflecting on the diplomatic attitude towards Israel he closed by quoting Winston Churchill when he said at the outbreak of World War Two, “You were given the choice between war and dishonor. You chose dishonor, and you got war.”
I have long made an issue of the situation in which a future Palestinian state will fall into the hands of Hamas. Until this conference I have never heard a prominent Israeli politician express the danger to the international community.  Liberman voiced his strong opposition to Israel returning to 1967 lines. He warned that Judea & Samaria would be placed in a similar situation to that of “Hamastan” in Gaza. “What happens the next day?” he asked rhetorically.
My disappointment was that he did not go on and portray, for the attending diplomats and journalists, the danger to towns in central Israel of having a Hamas Palestine bordered on Kfar Saba, Kfar Yona, and overlooking Ben Gurion Airport and our main national highways. It is the height of dangerous naivety to ignore, or push aside, such threatening scenarios.