Revealing the real face of Rouhani. 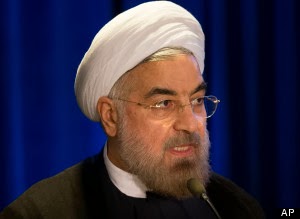 So, the UN General Assembly warmly applauded the smiling face of Hassan Rouhani. The American liberal media fell over themselves.  They projected him as a charismatic newcomer as they disseminated the Iranian leader’s charm offensive, but he is far from being that false public persona.
According to Israeli intelligence experts and analysts this was, indeed, offensive.

Let’s look at this guy’s bio;

The young Rouhani was engaged in Islamic revolutionary efforts even before Ayatollah Khomeni descended on Tehran from exile in Paris.
One of his first tasks was to organize the Iranian army and its military bases. During the Iran-Iraq War he was a leading member of the Supreme Defense Council. He was elevated to the High council for Supporting War, and later headed its Executive Council. This promotion was a result of his efficient work as the Deputy Commander of the war with Iraq and as the Commander of the Khatam-al-Anbiya Operation Center.
He became Commander of the Iran Air Defense Force and was appointed as Deputy to Iran’s Chiefs of Staff between 1988-89.
This man is far from being a spiritual politician.

In 1986, Rouhani was one of the three top Iranians that met with Robert McFarlane, President Reagan’s national security adviser, during the infamous Iran-Contra affair.
As a member of the Supreme Defense Council he was certainly in the loop in 1983 when the operation was planned and the decision was given for Hezbollah to blow up the US army barracks in Beirut that killed 241 American servicemen.
At the time of the 1994 bombing of the AMIA Jewish Center in Buenos Aires that killed 85 people, Rouhani, as First Secretary of the Supreme National Security Adviser and also the national security adviser to Presidents Hashemi and Khatami, must have had his finger on the button and is implicated in the Argentinian investigation that Iran has been swerving for twenty years.

During the 1999 student protests that left many Iranians dead, tortured, and oppressed, Rouhani, as Secretary to the SNSC, said, “At dusk yesterday we received a decisive revolutionary order to crush mercilessly and monumentally any move of these opportunist elements wherever it may occur. From today our people will witness how our law enforcement shall deal with these riotous elements if they simply show their faces..”

In 2000, the Washington Institute for Near East Policy described Rouhani as “power hungry.”

So much for the charming peacemaker and according to his UN General Assembly speech, for being the Iranian champion of human rights.

To those who think that Rouhani is a fresh new face in the nuclear issue, permit me to dissolution you.  Hassan Rouhani has been involved in the Iranian nuclear issue for sixteen years. He took charge of Iran’s nuclear case on October 6, 2003. He has subsequently been part of negotiations with European states starting in Saadabad  in Tehran, and later in Brussels, Geneva, and Paris.

During that time Iran has succeeded in completing its nuclear fuel cycle and, under Rouhani’s leadership, the Iranian nuclear team has taken numerous groundbreaking steps in its pursuit of weapon capability.

Barry Shaw is the Special Consultant on Delegitimization Issues to The Strategic Dialogue Center at Netanya Academic College.
He is the author of ‘Israel Reclaiming the Narrative.’ www.israelnarrative.com