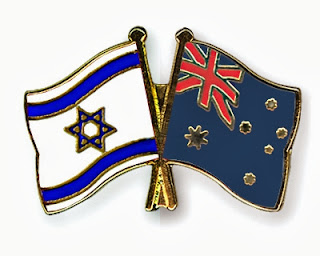 Three men, one aged 23, the other two aged 17, were arrested as part of a gang that viciously attacked five Jews in the Bondi district of Sydney on October 25, 2013.

Although this was a rare anti-Semitic violent attack in Australia, statistics show there are over five hundred anti-Jewish incidents a year in Australia.

Jews have been an integral part of Australia since its inception as in no other nation.
The first Jews to arrive in Australia, like so many of its pioneers, were prisoners shipped there by the British who looked on Australia as a penal colony. Today, the Jewish population numbers 120,000, making it the ninth biggest Jewish community in the world.

Sydney’s Jewish life developed with the help of Joseph Barrow Montefiore, a cousin of Sir Moses Montefiore. It built the first synagogue in Australia in 1844. This was quickly followed by Hobart on the island of Tasmania, Launceston, Melbourne, and Adelaide.

Australia remains the only nation, apart from Israel, whose founding fathers included Jews.  As a result, Jews were treated as equal citizens from the beginning. Jews were free to participate in cultural, economic, and political life of Australia without restriction. Already in the nineteenth century Jews had reached high positions such as speaker of Parliament, speaker of the house of Representatives, Premier of the State of South Australia, and the mayor of Melbourne.

The Jewish population was boosted at the turn of the century by refugees fleeing the pogroms of Russia and Poland.  The Second World War added a further injection of Jewish immigration to Australia with some seven thousand entering the country on visas before the outbreak of the war. As an outcome of the infamous Evian Conference of 1938, Australia generously agreed to accept the greatest number of Jewish refugees fleeing Nazi Germany. This was followed by a further flow of refugees in the aftermath of the Holocaust. Surprisingly, Australia has the highest percentage of Holocaust survivors of any diaspora community. Further influx came in 1989 from South African Jews and later from Jews released from the former Soviet Union.
Jews have participated and contributed to the pioneering settlement and development of Australia. Isaac Nathan is considered to be the father of Australian music. Sir Isaac Isaacs was the first Australian Governor-General. Sir John Monash led Australian forces in World War One. He was the first Major-General in the Australian Army, followed by Paul Cullen and, in 2009, neuro-surgeon Jeffrey Rosenfeld, a cousin of Monash, was promoted to that rank.

Israel Smith became the first Jew to win the Victoria Cross for bravery in battle. Smith had emigrated to Australia from Manchester, England, but returned to Britain to join the Manchester Regiment at the outbreak of the First World War. He was wounded five times and returned to Australia after the war.

Australia has a place in local history in Israel. On October 31, 1917, the 4th Australian Light Horse Brigade captured Beer Sheba from the Turks paving the way to the liberation of Jerusalem by General Allenby.
On September 25, 1918, the Australian Light Horse made the last cavalry charge of World War One by the banks of the Sea of Galilee at Tsemach and captured the railway station in the Jezreel valley. A memorial can be seen to this exploit in the gardens of college of Tsemach.

It is interesting to note that the famous Israeli general, Moshe Dayan, lost his eye fighting alongside Australian troops against the Vichy French in Lebanon in 1941. He was awarded an Australian military honor for his action.

Australia has come a long way from its days as a penal colony. Today, it has a strict immigration policy based on merit and identity with the cultural and national norms of the country. It has taken a strong position on illegal migrants. As such, it shares a meeting of minds with Israel.

The Australian Jewish community is very supportive of Israel and have been active is Jews in distress around the world, including past campaigns on behalf of Soviet and Ethiopian Jewry. There are a number of active Zionist organizations.

Australia’s government has always been a staunch ally and supporter of Israel. They perceive shared values and problems. Unlike many countries, leading Australian politicians have publicly acted and declared their firm opposition to the boycott movement in their country. In July, 2011, Australia’s then Foreign Minister, Kevin Rudd, joined Labour Parliamentarian and Chairman of Australia’s Foreign Affairs, Defense, and Trade Committee, Michael Danby, inside the Max Brenner chocolate shop in Melbourne in a public act of solidarity with the store that was being picketed by pro-Palestinian activists. Rudd said at the time, “I don’t think in 21st-century Australia there is a place for the attempted boycott of a Jewish business. I thought we had learned that from history.”

In July, 2012, several prominent Labour Party members in New South Wales successfully blocked a move by the Green party in favor of an anti-Israel boycott resolution.

In April, 2013, Australian Prime Minister, Julia Gillard, denounced pro-Palestinian activists as their protests against the opening of a Max Brenner shop was marred by anti-Jewish and Holocaust-denying statements and material, saying that Australia had always had firm opposition to the BDS Movement. Liberal Party deputy leader, Julie Bishop, promised to cut off federal grants to any individual and institution that supports the BDS campaign. If only European governments would follow Australia’s example.

As in most countries, the nest of anti-Israel radicalism can be found in Australia in the universities. Israeli legal action organization, Shurat HaDin, has filed a class action complaint, under the Australian Racial Discrimination Act of 1975 against a Sydney professor’s participation and public support for an academic boycott against Israeli universities.

In his letter, Shurat HaDin Australian lawyer, Alexander Hamilton, pointed out that it was unlawful for anyone “to do any act involving a distinction, exclusion, or preference based on race, national, or ethnic origin which has the purpose…of nullifying or impairing…fundamental freedom in the…economic, social, cultural or any other field of public life.”

It was felt that staunch support for Israel was wavering under a Rudd leadership, but the new Conservative government of Tony Abbott, in coalition with Julie Bishop, is expected to continue Australia’s firm support of Israel and to maintain the denial of funding to any anti-Israel boycott attempt. In a pre-election statement, Abbott said, “we are firmly committed to restoring the Australia- Israeli friendship to the strength it enjoyed under the [John] Howard government.”

As the headline in “The Australian” national newspaper on September 26, 2013, proudly heralded, “Unstinting Support for Israel Back in Place.”

Barry Shaw is the Special Consultant on Delegitimization Issues to The Strategic Dialogue Center, Netanya Academic College.
He is also the author of the book “Israel Reclaiming the Narrative.” www.israelnarrative.com