The Five Stones of Truth by Barry Shaw. 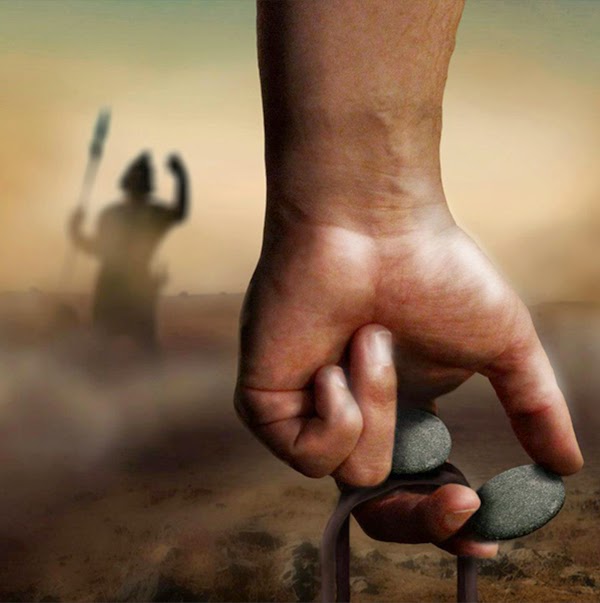 1 Samuel 17:40 "Then he took his staff in his hand, chose five smooth stones from the stream, put them in the pouch of his shepherd’s bag and, with his sling in his hand, approached the Philistine."

Two armies faced each other more than two millennium ago. The Israelites were retreating from the advancing Philistines. The two armies took their last stand on opposing hilltops in readiness for the final decisive battle. The odds favored the Philistines. Dividing them was the Valley of Elah in Judea. Today, some call it part of the West Bank. This is important because, in this tale, you will hear the echoes of history resound in today’s world.

Conditions favored the Philistines. The Israelites were led by a weak king. Strategically, the tailwind seemed to be with the Philistines who taunted the retreating Jewish people who were fearful and unwilling to head into another losing battle that they knew was facing them. Their land, their kingdom, was in jeopardy of being lost forever.

Each day the Philistines sent their most potent weapon down into the valley to insult and challenge the legitimacy of the Israelites. A giant named Goliath was their representative, their perceived strength. Nobody on the Israelite side was prepared to face the challenge until a boy stepped forward. David, a young shepherd boy from Bethlehem, had walked the fifteen miles to join the Jewish army facing the advancing Philistine enemy. He saw that nobody was willing to take up the challenge of defying them, so he walked down into the valley armed with nothing more than a slingshot.

The enemy burst out laughing when they saw this single figure of a lad step forward to take on their impressive figurehead. The boy waded into a nearby stream and took out five smooth stones. He armed his slingshot, whirled it round his head, and hurled the first stone at the enemy’s hero. It struck the middle of the giant’s forehead. Goliath fell to the ground, dead.

The Philistines were stunned into silence and shock. The Jewish army, amazed at the simple act of initiative from this young courageous boy, advanced confidently on the enemy and routed them from the battlefield. They saw that the perceived invincibility of the Philistines was built on nothing more than a clumsy giant without substance.

The story has great relevance today. The powerful narrative of today’s Philistines, the Palestinians, is built without substance. It can be brought down with a handful of smooth stones - the stones of truth, legitimacy, courage, heritage, and values. All it takes is one person with conviction and the knowledge to courageously go out armed with the weapons of the five stones and face the fraudulent giant, knowing that he represents nothing but lies and deception.

Learn the factual legitimacy of Israel. Research the events of San Remo and the League of Nations Resolution of 1922. Read what actually happened to the United Nations Resolution 181 that failed to make it into the statute books, to realize that the Palestinian narrative has no basis in fact or law.

With these simple weapons, the five stones of rights, justice, truth, facts and history, it is possible for Israel to gain the high moral ground and leave the enemy in disarray.

Barry Shaw is the author of ‘Israel Reclaiming the Narrative.’ www.israelnarrative.com
His new book ‘Fighting Hamas, BDS and Anti-Semitism’ has just been released. https://www.createspace.com/5333306