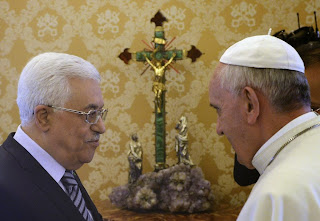 When the Vatican joined the chorus and announced it would sign a treaty with the Palestinian political leadership to recognize the ‘State of Palestine’ it was yet another sign that people are so fixed on a desire for ‘peace’ that it makes them shortsighted, if not blind, to realities.

The peace camp is so myopically short on rationale, and the power of reason is so weak, that it doesn't have the strength to pull the peace train out of the station, let alone allow it to reach its destination.

Allow me to highlight some simple facts that get in the way.

Let me be blunt. The Vatican takes no consideration of the rejectionist anti-Semitism of both Fatah and Hamas or, if it has considered this malevolent and determined opposition to the existence of Israel, has chosen to ignore it.

Israel, I suggest, deserves an answer.

It is inevitable that a State of Palestine will be headed by Hamas which declares itself to be an Islamic movement dedicated to jihad. How does that square with the best interest of the Catholic Church as we witness the slaughter of Christians at the hands of other similar radical Islamic movements?

There are those in the Holy See who say that Hamas does not represent peace-minded, freedom-loving Palestinians. I respectfully remind them that every Palestinian poll and election has proven this notion to be wrong.  In every case, Palestinian Arabs vote overwhelmingly for Hamas.

As I repeatedly explain to anyone capable of clarity of thought, those who vote Palestine will deliver a Hamastan. This includes the Vatican.

The Vatican needs reminding that Palestinians in Ramallah, Gaza, and even Bethlehem persecute Christians.

Anti-Israel voices blame this phenomenon on “occupation and oppression” but, like most anti-Israel claptrap, this lie is easily exposed by the fact that while the Christian population has plummeted under Palestinian control the Muslim population has rapidly expanded.

My question is why the Vatican is favoring a Palestine of disappearing Christians?

If they really believe that granting statehood and recognition of radical anti-Jewish and anti-Christian regimes is the way to peace, why doesn’t the Vatican offer recognition and statehood to Islamic State (ISIS)? After all, perhaps they too will stop their persecution of Christians? Of course this is a ridiculous notion, but no more ridiculous than encouraging a future state that will be dominated by another radical Islamic jihadi rule dedicated to the slaughter of Jews and the destruction of Israel.

The Vatican’s generous offer of signing a treaty of recognition to the State of Palestine fails to define the borders of such a state. This is deeply troubling taking into consideration that Palestinians regularly call for a state “from the River to the Sea,” in other words, a state in place of Israel.

The Vatican will say that borders will be settled between the parties, but surely their recognition could have waited until the world, including the Catholic world, witness a willingness not seen until today by the Palestinians to recognize Israel’s right to exist as the national home of the Jewish people.

It is this myopia to grant a generosity to the violent rejectionists that will jeopardize and set back peace for many years to come.

Until well-wishers, like the Catholic Church, appreciate the true nature and intent of Israel’s enemy, no peace will come from altruistic gestures that restrict Israel’s maneuverability.

Instead, the Vatican and others must take drastic measures to reform or change all sides of the Palestinian political leadership into taking dramatic steps that include, first and foremost, a commitment to recognize and live in peace alongside Israel.

One way would be to condition their financial and moral support on making these essential steps.

The Vatican gesture should have been the final reward for such a Palestinian reformation, not a reward for their recent violence and intransigence.

Barry Shaw is the Consultant on Delegitimization Issues to the Strategic Dialogue Center at Netanya Academic College. He is also the author of ‘Fighting Hamas, BDS and Anti-Semitism.’ https://www.createspace.com/5333306