The Delusional State of Denial. 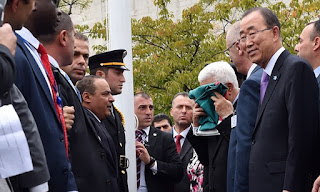 It’s not some state created in peace that they want. It is a delusional dream in which Israel doesn’t exist.

And we are expected to play along with this deception, to ignore our own rights. Dispense with our ownership. Throw away our property rights.

To accommodate these liars, these rogues?

What are we doing to ourselves?

We are indulging in the same fraudulent delusion as our enemy.

To sleepwalk to our own oblivion.

This is nonsense. This is madness. This is fevered insanity to which no nation on earth has ever subscribed.

For Israel, a Palestine peace is an impossible hopeless dream with a delusional vicious rogue state bent on our destruction.

It’s time to call a spade the bloody shovel that it is.

As Yossi Beilin, the architect and driver of the Oslo process, said after the ranting speech of the leader of his disarrayed people at the United Nation General Assembly podium on September 30, “I wish he would have called for the dismantlement of the Palestinian Authority.”

So ends the Oslo dream.

Abbas shattered the remnants of the illusion of Oslo. His Authority was never a solution but always the heart of the problem.

This applies, with absolute certainty, to Hamas.

There you have the total failure of the Palestine project.

Israel acceded to international demands of allowing a Palestinian leadership to develop. They promised us the road map to peace. They gave us the path to our own destruction.

The Palestinian leadership, in all its ugly forms, imposes on us the infamous four D’s. Not of the creation of their own state, but the deconstruction of ours.

How much longer must be tolerate this delusional “solution” to the Israeli-Palestinian problem?

Barry Shaw is the Senior Associate for Public Diplomacy at the Israeli Institute for Strategic Studies.


He is the author of ‘Israel Reclaiming the Narrative’ and ‘Fighting Hamas, BDS and Anti-Semitism’ to be found at www.barrysbooks.info
Posted by Unknown at Thursday, October 01, 2015