The immorality of media coverage of the Palestinian slaughter of Jews. 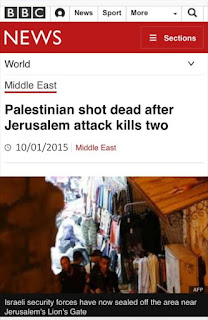 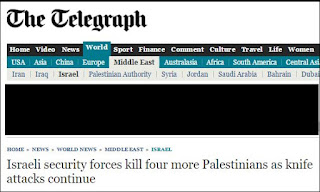 Strange how tepid has been the Western media coverage of the stabbing deaths of innocent Jewish pedestrians in Israel -condemnations that would be less half-hearted had the acts occurred on the streets of Washington, Paris or London - and how loudly they shout about Palestinian deaths, even those of Palestinian killers.

Come to think of it, there was nothing of the equivocal reaction to the recent killings and the unanimous and unambiguous international outpouring of emotion and solidarity elicited by the fatal hatchet attack on a soldier on a London street on May 22, 2013, a scenario not very different from those unfolding today in Jerusalem and Tel Aviv.

According to the media, a knife in the hands of a Palestinian murderer is the weapon of the poor. And when he is killed during or after his lethal attack, well, he's the victim.

Is it only when the head is that of an Israeli Jew that emotion and sympathy fades and an immoral equivalence between victim and killer raises its ugly head?

And, heaven forbid that Israeli Jews take the initiative to stop these murderers in their tracks before they kill.

It is then that biased journalist begin to keep running scoreboard on how many are dying on each side, and broadcasts the rising figures of dead killers to present them as the unfortunate victims of violence perpetrated by the perennially evil Israelis that neatly fits the editorial bias of decades of misreporting.