The Kayla Mueller the media is not telling you about. 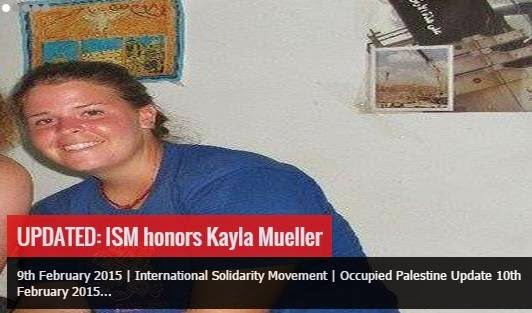 Kayla Mueller was the aid worker captured by ISIS that they reported killed in a Jordanian air strike in Raaqa, Syria.

Eulogies rang out for this woman. President Obama said she “represented the best of America.” Even Benjamin Netanyahu, Israel’s Prime Minister sent his condolences on behalf of the people of Israel.

The mainstream media issued expressions such as “Kayla has touched the heart of the world” as indeed she did as reports of her death filtered in.

But there was a darker side to Kayla Mueller, one that the media did not cover.

This was revealed when a radical anti-Israel group known as the International Solidarity Movement (ISM) issued a photograph of her with the heading ‘ISM honors Kayla Mueller.’
Below her picture ISM printed ‘Occupied Palestine Update – 10th February 2015.’

It appears that, prior to traveling into Syria, Kayla Mueller had been in Israel and participated in several provocative anti-Israel actions with ISM.

According to Lee Kaplan, the head of Stop the ISM group and an investigative journalist, Mueller was a member of ISM and worked for at least two years with that Palestinian terror-supporting group.
Kaplan writes that Mueller was involved in anti-Jewish activity in Jerusalem as part of the ISM-provoked demonstrations by occupying properties in Shekh Jarrah after the Israel Israeli court had judged belonged to Jews forced to vacate in face of the advancing Jordanian army in 1948. There she stayed with the Al-Kurd family.

Kayla Mueller took part in provocative demonstrations to prevent the IDF from demolishing the homes of convicted terrorists and suicide bombers after the courts had given the authority for their demolition. Her presence Bil’in was confirmed by Abdullah Abu Rahma, who is the coordinator of protest actions in the village.

She wrote this to describe the result of one violent provocation she participated in which rocks were thrown;

“The smell and taste of tear gas has lodged itself in the pores of my throat and the skin around my nose, mouth and eyes. It still burns when I close them. It still hangs in the air like invisible fire burning the oxygen I breathe. When I cry tears for this land, my eyes still sting.”

In her letter of October 29, 2010, she never mentioned the violence initiated on the Palestinian side, but Mueller lies in her letters. She accused "religious settlers" of rock-throwing while attending "non-violent" protests when in fact it was the Palestinian Arab youth with who she was embedded that were the rock throwers.

It would be interesting to discover if her move into Syria was initiated by ISM. If so, they bear a heavy responsibility for her death.

ISM claims on its website that it wants to destroy Israel by ‘non-violent, direct action’ but it also says it supports ‘every type of Palestinian resistance against the Zionists.’ This support for ‘every type of Palestinian resistance includes sheltering and assisting the movement of terrorists and suicide bombers and attempts to thwart the actions of Israeli security forces in pursuit of these terrorists.

ISM played a significant role by providing direct support to the 2 suicide bombers from Britain responsible for the Mikes Place explosion in Tel Aviv in 2003. Israel’s General Security Service reported with evidence that the two terrorists were careful to base their presence in Judea & Samaria by forging links with members of the International Solidarity Movement.

ISM sheltered in its office, Shadi Sukia, a leading member of Islamic Jihad.

Speaking as someone deeply involved in researching terrorism, and one of the founders of the Netanya Terror Victims Organization, I want to know why brain-washed, terrorist-supporting anti-Semites who join radical action groups like ISM, and come to Israel to carry out anti-Israel actions in support of Palestinian provocateurs and terrorists, are feted in the Western media and by governments as ‘peace activists’?

ISM will portray Mueller as an innocent martyr for human rights as part of their ongoing recruitment.
People had better understand the fanaticism and lies of Israel’s opponents so that future Kayla’s may be spared the ordeal.

Barry Shaw is the author of ‘Israel Reclaiming the Narrative.’ www.israelnarrative.com  He is also the Special Consultant on Delegitimization Issues to the Strategic Dialogue Center at Netanya Academic College.
Posted by Unknown at Sunday, February 15, 2015