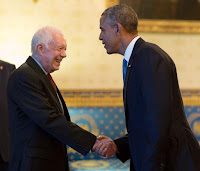 Former President Jimmy Carter just announced his to have cancer surgery.
Carter was the president that allowed the cancer of the Islamic Republic of Iran to take root.

When, in 1979, Jimmy Carter met the leaders of Germany, France and Britain at a summit, he informed them that he intended to support the Ayatollah Khomeini instead of standing by America's traditional Persian ally, the Shah of Iran.

In essence, Carter was deserting a pro-Western ally in favor of a terrorist Muslim cleric.

These leaders instinctively knew that, without US support, the shah's regime were numbered.

As journalist, Mike Evans, related in a recent article, the French Premier Valerie d'Estaing was shocked.

"The only way I can describe Carter is that he was a 'bastard of conscience,' a moralist who treated with total lightness abandoning an ally for a cleric Carter thought would be better for human rights."

How wrong Carter was, and how badly the world is suffering for his political mistake.

Now, today, we have President Obama abandoning a pro-Western US ally, Israel, in favor of terrorist Islamic regime in Tehran.

How wrong Obama is, and how badly the world will suffer from his political mistake.


Barry Shaw is the author of 'Israel Reclaiming the Narrative' available on Amazon or from www.israelnarrative.com