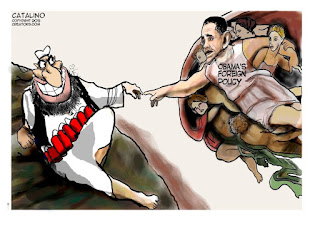 The headline in the Jerusalem Post read "Obama: Lack of deal would embolden Iran."

Obama has it completely the wrong way round.  History shows us the opposite to be true.

When Israel evacuated Gaza as a benign peace gesture to the Palestinians, the result was an emboldened Palestinian faction that used this altruism as a launching base for rockets and terrorist attacks against Israeli civilians.

When America defeated the insurgents in Iraq and contracted to pull its troops out of that country as a benign Obama gesture, the result has been wholesale slaughter at the hands of an emboldened ISIS.

When America negotiated a good faith nuclear deal with North Korea the result was deception and a nuclear-rich and emboldened enemy.
Wendy Sherman was the architect of both nuclear deals - North Korea and now Iran.

The result of this altruistic Obama deal will be an emboldened nuclear Iran for sure.

Being benign to radical enemies does not get you peace or security. This is the fault line of the Obama's foreign policy doctrine.

It was true when Hillary Clinton said she had pushed the reset button with Putin and called Assad "a reformer.'

It is even more true with Obama's dangerously naive weakness in re-configuring Iran in the Middle East, as we will find out to our cost.

Barry Shaw is the author of ‘Israel Reclaiming the Narrative.’  http://www.israelnarrative.com/