If you vote for the Iran deal you will have our blood on your hands, even before Iran has a nuclear bomb. 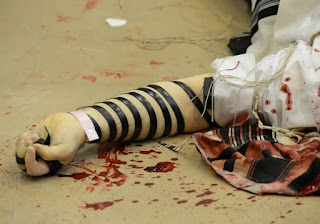 It seems we are living in a dangerous world that defies all logic and common sense. I am referring to the awful Iran deal.

Following in the footsteps of admission by both President Obama and Ernest Munoz, the chief architect of the deal, that global and regional terrorism will increase as a result of this deal, caused by the release of $150 Billion by the US Administration to the radical regime in Tehran, I received, almost simultaneously, two pieces of news that left me in shock.

One was the announcement that the Iranian Deputy Foreign Minister, in advance of his trip to Moscow, said that Iran will be soon be arming all its allies and groups, particularly those opposing Israel.  “We will supply arms to anyone and anywhere necessary,” he had said days earlier.

The other was the news that over three hundreds American rabbis had signed on to a declaration supporting Obama’s deal with Iran.

I have not stopped lobbying US Senators and Congressmen, and persuading others to follow my lead, to oppose this deal, and I’ll tell you why I will continue to do so, even at this eleventh hour.
Because my life as an Israeli Jew, and the life of my family members and fellow countrymen, depend on it.

I am also not talking about the threat of a nuclear Iran. I am talking about the death of Israelis as a result of the release (I call it American funding) of terror dollars by the US Administration that is will hit Israel, and that is going to kill Israelis, either here or abroad.

Let me put it as bluntly as I can.

To these people I say, when that day happens, when we are hit by newly equipped Hamas, Hezbollah and other terror groups armed with the weapons paid for by American-released money, and when we Israelis die, I will call out the names of the rabbis and the politicians that voted for the deal and let you know that the slaughter of Israeli Jews will be on your conscience.

You will have our blood on your hands.

By your act, in supporting this tragic deal, you are knowingly aiding and abetting the world’s worst state-sponsor of terror now celebrating your stupidity and announcing that it will target us Israelis.

Simply put, we do not have to wait for a nuclear cloud to rise over Jerusalem. Whenever and where ever Iranian supported terrorists carry out their dastardly acts and strike down my fellow Israelis, you will bear the blame, and you will bear the shame.

Barry Shaw is an Israeli Jew.
He is also the author of ‘FIGHTING HAMAS, BDS AND ANTI-SEMITISM.’ https://www.createspace.com/5333306