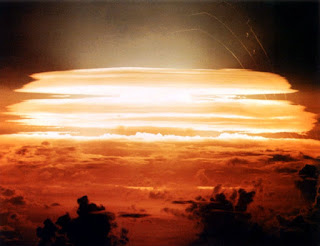 Today is 9/11 and we recall the horrors of that day when mass terror struck America.

In less than a week, the US Congress will vote on the important Iran nuclear deal.

A few days ago, I recalled another significant date – September 7.  Not many people remembered what happened on that date. It was the date, in 2007, when Israel destroyed the nuclear reactor in Syria. Israel was criticized for that air strike and punished by the US Administration who withdrew aerial intelligence from the Jewish state. Israel was also widely condemned when it took out the Osirik nuclear reactor in Iraq in 1981 with another air strike.

It is little known today, on 9/11, that the site of that Syrian nuclear reactor is in the hands of ISIS.

Can you imagine our world had Israel not destroyed this complex leaving Syria with the eight year advantage to progress its nuclear development program to completion, a nuclear facility that has now fallen under control of the most brutal and inhuman terror regime in the world?

Those truly commemorating the victims of 9/11, victims of an earlier warning shot, killed by radical Islamic terror, should acknowledge the service that Israel gave to mankind by its unappreciated actions in Syria and in Iraq.

As we bow in memory of 9/11 and look at recent history, when it comes to the link between nuclear arms and radical Islamic terror regimes, it is obvious that Israel gets it right and America gets it wrong.

As we head to the next significant date of September 17, may the decision-makers on Capitol Hill do some last minute soul searching and realize that Israel got it right on two previous occasions, and that they are pin-point accurate in their assessment of Iran and this deadly deal with yet another Messianic Islamic terror regime.

Barry Shaw is the Senior Associate for Public Diplomacy at the Israeli Institute for Strategic Studies.