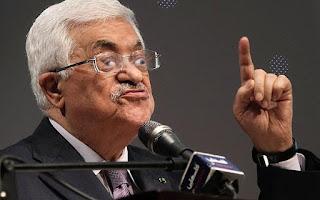 Mahmoud Abbas, the man who was elected to a 4 year term as president of the Palestinian Authority in 2005 liked it so much he decided to stay on unelected for another six years, thereby displaying Palestinian-style democracy.

Recently, this ancient occupier of the presidential seat in Ramallah announced he was going to the United Nations on September 29 to “deliver a bombshell” at the end of his speech.

As the co-founder of the Netanya Terror Victims Organization, I can tell you that when a Palestinian tells you he’s going to deliver a bombshell you are strongly recommended to get out of the building as fast as possible. Don’t say you haven’t been warned, UN delegates and workers.

Assuming he’s not going on a suicide mission - most terrorist leaders tend to send somebody else to do the messy stuff - what can he be possibly want to explode?

We know he’s desperate to grab the headlines. He and his failed cause is not even getting a yawn from a media obsessed with a massive crisis in which migrants want to turn Europe into the new Middle East, or an Obama feverishly trying to provide the messianic ayatollahs in Tehran with the ultimate weapon to drop onto the United Nations building sometime down the road, as part of his ‘best deal’ legacy.

So who’s got time to listen to Abbas who claims that Palestinians are really Canaanites?

Assuming he wants to surprise us with some headlight-grabbing shock and awe, what could possibly get us to sit up and take notice?  Well let’s consider his options;.

He could offer to resign from the Palestinian Authority, as he does every other week. But we know he’ll have forgotten about it by the time he gets home and find the chair’s still warm.

He could declare that the Oslo Accords are null and void, but he’s treated them that way for decades, so what’s new?

Or he could declare that he recognizes Israel’s right to exist in peace and security as the Jewish state alongside the State of Palestine.

No. I’m joking.  He knows he’ll be dead before he leaves the building.

Sorry about the aberration. It was just me thinking out loud what might be with Abbas.

As we say in the kosher Jewish state, and with due respect to my Muslim friends – pigs might fly!

Barry Shaw is the author of ‘Fighting Hamas, BDS & Anti-Semitism.’
Posted by Unknown at Monday, September 21, 2015