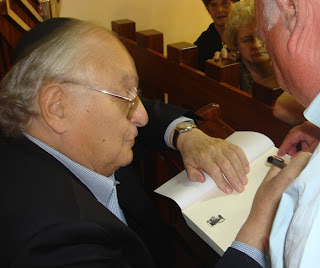 YEHUDA AVNER was born in the poverty-stricken Strangeways district of Manchester in 1928.
Early events formed his life. As a young Zionist he made his way to Palestine in 1947 to involve himself in the creation of the Jewish State.
He entered the Israeli Foreign Office and served as a Consul in new York, a Counselor at the Israeli Embassy in Washington D.C., and as Israeli Ambassador to Great Britain and, later, to Australia.

He was also a speech writer and secretary to Prime Minister's Levi Eshkol and Golda Meir as well as an advisor to Yizhak Rabin, Menachem Begin, and Shimon Peres.

His wealth of experience caused him to be close witness to conversations and events that turned the pages of history.

These are recounted in an exception book 'The Prime Ministers. An Intimate Narrative of Israeli Leadership'.

A thick, heavy, tome, it is ,nevertheless, a page turner that is highly recommended for people keen to discover the secrets and nature of the personalities that shaped Israel over the last seven decades.

Yehuda Avner came to Netanya, in early October, to talk to an audience at the Young Israel Synagogue.
His eloquent style is impressive and, sadly, in short supply in today's modern world where intelligent and persuasive conversation has been replaced with soundbites.

He even quoted MacBeth in reference to the importance of constantly restating Israel's historic, religious, cultural, heritage  and international legitimacy to the land.  Failure to do so fails to anchor our rights to exist in solid significance.  In an age of the threat of delegitimacy, when the existence of Israel as the Jewish state is called into question, we could find ourselves in MacBeth's tragic situation:

"Out, out, brief candle! Life's but a walking shadow, a poor player that struts and frets his hour upon the stage and then is heard no more: it is a tale told by an idiot, full of sound and fury, signifying nothing." Macbeth Quote (Act V, Scene V).

We can shout about our land but, without the wealth of context, it signifies nothing.

Avner told the tale of an Israeli pensioner who showed his arm to a young man. On it was engraved, in indelible black letters, his Auschwitz number.
The young man opened the top button of his shirt and took out a tag that he carried around his neck on a chain. He showed the pensioner the I.D.F. number engraved on his army tag.
That is the story of the Jewish people and the State of Israel.

Avner recalled a moment in history, that related to the Israeli coastal town of Netanya, when he accompanied Menachem Begin on a visit to the White House.
Begin had to explain to the Southern Baptist peanut farmer who had become President of the United States what 'Moledet' (the Homeland) meant to the Jewish people.

"Mr.President", said Begin, "My generation that rose from the pit of hell are clinging to a principle. There was a time when our Jewish men could not defend their women and children against those enemies determined to exterminate us. Our people were terciated..."
Begin saw that Jimmy Carter looked puzzled at this word, so he explained.
"The Romans decimated our people. That is they killed one in ten of our people.  The Nazis terciated us. That is, one out of every three Jews worldwide were destroyed by the Nazis. They terciated us".

Pointing to the maps on the Oval Office Presidential desk begin stabbed his finger at the town of Netanya on the Mediterranean coast.

"Mr. President. The distance from Tulkarm to Netanya is only nine miles. Nine miles, Mr. President. A single armoured column can cut our nation in two in less than half an hour".

His voice filled with emotion, Begin declared to Carter.
"I hereby take an oath this will never happen to my people!"

Then he broke down in tears. For minutes there was silence in the Oval Office until Menachem Begin was able to compose himself and apologise to the American President.

This, according to Yehuda Avner, who was witness to this scene, planted a seed in Carter that led to the Camp David peace agreement with Sadat and Egypt.

After that, Carter turned his back on us.

Buy THE PRIME MINISTERS.  It is an enthralling read.
Posted by Unknown at Saturday, October 09, 2010