5 June.
Good luck Israel as the UEFA European Under 21s Championships get underway today in Israel with two matches. 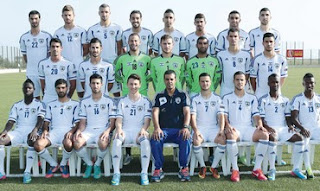 Israel faces Norway in the opening match at the new Netanya stadium.
Norway are no pushover. They beat France 5-4 in the play-off round.
The Israeli team is based at the Ramada Hotel in Netanya's South Beach, well known to many who own vacation homes there.
Later England, who are based in Caesarea and trained Tuesday in Netanya, kick off against Italy in Jaffa's Bloomfield Satadium.
Both games are live on Israeli TV.
The finalists play in two groups;
Group A:  Israel, England, Italy, Norway.
Group B:  Germany, Russia, Spain, Netherlands.

Keep watching this space for regular updates of the competition.
Posted by Unknown at Wednesday, June 05, 2013