The Evil Duplicity of the British Methodist Church.

The Evil Duplicity of the British Methodist Church   by Barry Shaw.

The British Methodist Church, with the help of the infamous BDS Movement, is distributing a questionnaire calling for the consumer boycott of Israel. This is a significant step against Israel. In April 2010, they declared a partial boycott of “settlement” products. Now they are hitting on the whole of Israel.

Robin Shepherd pointed out in “The banality of Methodist evil,” (Jerusalem Post April 7, 2010), that an institution professing the pursuit of love, truth, and justice is now pursuing hate, lies, and hypocrisy against Israel.

They are doing it at precisely the time when peace talks are being conducted between and the Palestinian leadership. Strange timing, don’t you think?  Maybe, in this context, they are doing it as a friendly gesture to push Israel into ending what they perceive as the injustice of the Palestinians?   I don’t think so.  They deny it’s a campaign against Israel, but it is.

If “occupation” is the issue, why hasn't the Methodist Church proposed boycotts against other countries practicing occupation?  If its “occupation” and “oppression” they object to, why haven’t they come out against Turkey, who displaced 400,000 Cypriots in a violent invasion and forty year old occupation of Northern Cyprus? China’s occupation of Tibet? Or Morocco’s occupation of Western Sahara? Not a peep over these places. No, it’s only Israel they beat up on by making the Palestinians their poster child.
Methodists have no thought as to why Israel needs to take the security steps it does to protect its people as its first and primary consideration. They make no mention of decades of Palestinian terrorism, including suicide bombings, against innocent Israeli civilians. They fail to take into consideration the numerous peace gestures and painful concessions of successive Israeli governments, all totally rejected by the Palestinians. In fact, the Israeli position is conspicuous by its absence in all Methodist deliberations. In short, it lacks even-handedness, fairness,  or in their language, it is devoid of love, truth, and balanced justice
.
What is more puzzling is that the Methodist branch of the Christian religion is siding with an entity that hates and abuses Christians, and is acting against a the only place in the Middle East that protects its Christian population, and allows them unfettered freedom of religion. Surely they know that Bethlehem, perhaps the most holy place in Christendom, a place that had a majority Christian population of over eight percent when under Israeli guardianship, is now under twenty percent, and falling, under the occupation of the Palestinian Authority.  Christians have fled the oppressive Palestinian regime, both in the West Bank and in particular Gaza, to the extent that they number less than 1.7% of the population. Methodists! If you are a Palestinian Christian you move to Israel. Just ask the Christian population of east Jerusalem if they prefer to be Israeli or Palestinian.

I ask Methodist readers of this article one question. Who do you really prefer to have as guardians of the Christian holy places in Jerusalem?  Israel? Or Hamas? Put your hand on your heart and give yourself the honest answer. I rest my case.

But why is the Methodist Church going out of its way to sanction and boycott Israel while ignoring massive crimes against humanity, many of which slaughter fellow Christians? Why, in their eyes, is the Jewish State of Israel more evil than all others?  Quite simply, it is because the Methodist Church is founded on replacement theology. Jews are the chicken bone in their throat that has to be spat out and thrown away. For them, the Christian ideology of anti-Judaism has been replaced with a more modern cloak of anti-Zionism. In its deep malevolent heart it is one and the same thing. They would side with the devil, as they have in the past, to remove this perceived blot on the face of Christianity. As such, they share an agenda with Islamists such as Palestinian Hamas (who they support) whose Charter still carries the call to kill Jews. They failed in their attempts to have Jews recognize Jesus as their savior so they adopt ways, such as this questionnaire,  of turning Jews into an unwanted pariah.

The Methodist Church has been waging this war against Israel since before 2007. What is so distasteful about the British faction is that their hierarchy has been hijacked by a radical minority that constantly places anti-Israel resolutions on its agenda that are not supported by rank and file priests. There is a battle going on in the British church between those who bravely support Israel, and their leaders who oppose Israel. Local pastors who speak up for Israel put themselves at risk. If they refuse to toe the official line they could find themselves out of a job. Dismissal by the hierarchy would also mean they would be made homeless as they live in property owned by the church. Such is the threat they endure in their love and support for Israel.
One outspoken Methodist opponent of his leadership is David Hallam who, in 2011, said, "What I object to is money, which I am putting on the collection plate on a Sunday, being used to fund a political campaign against the Jewish state. This is both discriminatory and a misuse of a charity's funds. I object to the one-sided and bigoted approach.”

On 12 October 2011, he reported on anti-Semitic views expressed by people attending a Methodist at the Rivercourt Methodist Church in West London earlier that month.

The official Methodist position has always been completely one-sided and anti-Israel. While constantly questioning Israeli policies, including its security concerns, it makes no profound statements about Palestinian anti-Semitic ideologies and statements used to promote violence and terror against innocent Israelis, and to deny its right to exist. On the contrary, it actively supports this agenda based on their theological denial of land for Jews while actively supporting land for Arabs. It constantly calls “disputed territories” Palestinian land. Their actions and theology firmly indicate that they consider all of Israel as Palestinian land in line with the agenda of the BDS Movement.

The biased leaders of the Methodist Church, in their linking to the BDS Movement, know full well that they are advocating the elimination of the Jewish State of Israel. They are aware of the words of Norman Finkelstein who turned away from the basic dishonesty of the BDS Movement calling them a “No Israel” cult.

Like their BDS partners, the British Methodist Church is dishonest. Instead of coming out publicly and saying that Israel shouldn’t exist, as they do in closed door cabals, they are now trying to wrap themselves with a cloak of public opinion support for their consumer questionnaire.

They think they are being clever by implementing such tactics, but they are not talking  about rights, they are talking about destroying Israel. This kind of duplicity of saying they are agnostic about Israel is a lie. They do it because they know they do not have a broad public if they were to come out openly and say, according to their religious beliefs, that Israel has no right to exist.
Israel demands to hear what they have to say about Israel’s legitimacy, and Israel’s rights. It is not an accidental omission that the BDS Movement, and now the Methodist Church, choke on mention of Israel’s rights.
The “No Israel” cult of BDS has fooled the Methodist Church into supporting them, but this is easily done because they share the same “No Israel” ideology.

It is shocking to see how far the Methodist Church has strayed since its founding days under John and Charles Wesley, who were both passionate spiritual advocates of the Jewish return to the Holy Land. Charles Wesley’s hymns were full of biblical calls for the ingathering of the Jewish people to Israel.

“O that the chosen band might now their brethren bring
And gathered out of every land present to Sion’s King.

Of all the ancient race not one be left behind
But each impelled by secret grace his way to Canaan find!

We know it must be done for God hath spoke the word
All Israel shall their Saviour own to their first state restored.

Rebuilt by His command Jerusalem shall rise
Her temple on Moriah stand again, and touch the skies.”

How far they have strayed can be seen in their adoption of the Palestinian Kairos Document that denies Jewish rights in Judea and Samaria by replacing them with the doctrine of Palestinian land. They have not only rejected biblical evidence, their own founding principles and theology, and international resolutions confirming Israel’s rights under international law, they have drifted into the arms, and are united with, those who relentlessly seek the destruction of Israel.

The Methodist Church has failed to work for mutual peace and reconciliation in the Middle East. On the contrary, it has always taken a strongly biased position against Israel.

The release of the Methodist Church questionnaire says less about Israel and much more about their fatal drift into the arms of the BDS Movement and, ultimately, into the radical claws of a Palestinian movement bent on eliminating Israel.

Barry Shaw is the Special Consultant on Delegitimization Issues to The Strategic Dialogue Center at Netanya Academic College.   He is also the author of  "Israel Reclaiming the Narrative.” www.israelnarrative.com 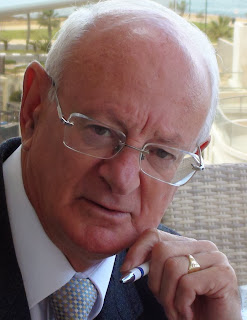