“Kick the Jewish State out of Football!” This is Racism, FIFA! 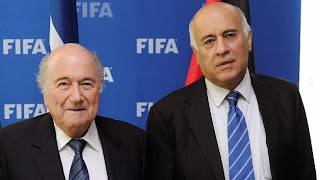 If Israel has to go that extra mile for peace, after multiple offers of concessions were roundly rejected, then the Palestinians, who are so far behind, have to go a full marathon distance just to catch up.
But they are not on the start line. They are not even on the track. Instead, they are in the judges’ stand screaming to have Israel disqualified and removed from the race.

In sporting terms, take FIFA, for example. As Israel uncovers Hamas couriers and terrorist smugglers among the Palestinian football squad, their former terrorist head-honcho, Jibril Rajoub, exploits FIFA as a political football. He does it not to advance Palestinian facilities or equipment but to get Israel thrown out on spurious grounds. Cynically, he has done his math and reckons he has the votes to have Israel boycotted.

FIFA, once famous for its “Kick Racism out of Sport,” is now being asked to adopt a new slogan, “Kick the Jewish State out of Football,” on July 4.

Should that tragedy occur you will know that the Palestinian cause has brought their anti-Semitic racism to the pinnacle of world sport.

If FIFA red card Israel, they will hang the gold medal of football racism round the neck of Palestine.