The truth and implications of the “Jerusalem Intifada.” 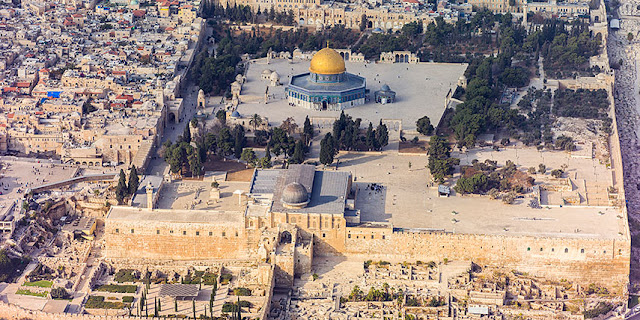 Let me put it in record.

The status quo was not changed by Israel on the Temple Mount, despite Palestinian protests.

While they were doing so, they were accosted by the paid recruits of the northern branch of the Islamic Movement that has its center in the Israeli Arab town of Um el Fahm and is headed by a notorious Islamic provocateur named Sheikh Raed Salah in collaboration with the religious Wakf, the Palestinian Authority and with the encouragement of Hamas in Gaza. They were shouted at and taunted and had copies of the Koran pushed in their face.

With the encouragement of the PA and Hamas, Muslim youths brought rocks, cinder blocks and material to make firebombs into the Al-Akar mosque.
The question needs to be asked how these weapons of popular violence were brought onto the Mount and into the mosque. They certainly did not bring them through the official entrances which are secured by Israeli guards who are there to maintain law and order.
The only way they could have got there was with the assistance of the religious Wakf, who controls the Islamic site, in collaboration with the Islamic Movement and the PA, and that could only have been by access through the underground excavations that the Palestinians had burrowed illegally under the Temple Mount several years ago and to which the Israeli government turned a blind eye.

The Islamic Movement shares the same radical ideology as Hamas, the Muslim Brotherhood and ISIS, but Mahmoud Abbas was the chief social media inciter.

He made speeches which were distributed over the internet in which he said “the Jews are coming to destroy our holy places and defile them with their dirty feet.”
This inciter in chief followed that up by saying, “Every drop of blood spilled in Jerusalem is pure blood. Every shahid (martyr) will reach paradise and every injured person will be rewarded by Allah.”

This was the anti-Semitic incitement coming from the mouth of Israel’s “moderate” peace partner, the so-called President of the Palestinian Authority.

Under international pressure Abbas, after inciting the bloody violence, began calling for restraint.

What is interesting is that while he was calling for the Arab members of Israel’s Knesset to lower the tone of their rhetoric, and they had been pretty extreme in their words and actions, his call was ignored by them when they announced they intended to go up to the Temple Mount a few days later. Not only did they defy the Israeli Prime Minister, they also defied the Palestinian leader. While they sit in Israel’s parliament they are encouraging violence with their words and deeds. This surely is an act of sedition. One brave Arab mayor, Ali Salim of Nazareth, demanded that these Arab MKs not come to his town to spread their incitement. He accused them of “ruining co-existence.”

Hamas in Gaza began calling the violence the “Al Quds Intifada,” literally the “Jerusalem Intifada.” They supported the violence by organizing hundreds of Gazans to march on Israel’s border to breach it and to attack the nearby kibbutzim and villages to kill Jews. The threat for Israel’s security forces was that Hamas would infiltrate groups of terrorists into these huge demonstrations to breach the border and carry out the wholesale slaughter of Israelis.

After three days of effort resulted in failure, due to the determination of the IDF that resulted in casualties the media was quick to broadcast intimate details of Palestinian deaths, something they had been loath to do when Israeli Jews were killed, to make their story more emotionally edible to their viewers.

The crescendo of hate and religious emotion, generated by multiple Palestinian sources, spilled over with deadly violence onto the street and was supported by a media buying into Palestinian lies by condemning “Israeli provocations.”

Indeed, much of the media replayed their editorial bent that portrayed Israel as the perennial bad guys and Palestinians as the innocent bystanders and victims. There was little space that gave Israelis and Jews the decency and truth they deserve.

Fox News, normally one of the more balanced news outlets when it comes to Israel, got it completely wrong with a headline dealing with the Gaza violence, "Israel security forces shoot and kill 2 Palestinian teenagers at Gaza protest."
To the uninformed, this headline read as if there were only 2 teenagers protesting and Israeli soldiers brutally killed them for simply protesting. This bad reporting reflects the poor image that faulty journalism casts over Israel.
When a 19 year old Palestinian, incited by repeated lies of Israeli “crimes” against Islamic and Palestinian holy places, took a knife and went to the Old City of Jerusalem to murder Jews, he found the Benita-Bennett family walking back from prayers at the Western Wall of the Temple Mount. His attack resulted in the murder of Aharon and Rabbi Nehamia Lavi. He also seriously wounded Aharon’s wife, Adele, and injured their two-year old son. He was killed by security forces before he could continue his deadly rampage.
But this is how the BBC News headline put it, “Palestinian shot dead as Jerusalem attack kills two.”
There was total editorial divorce from the facts and truth of the fatal incident.
The fact that this Palestinian killed Jews was absent. Jews became an anonymous faceless number killed, according to the BBC. Some wrongly interpreted their headline as that the unnamed “two” had enigmatically been killed by the city of Jerusalem.

The truth is that Mahmoud Abbas is a bankrupt “peace” partner. He has nothing to offer.

Against the background of this awful truth, it is demanded of Israel that we surrender the Old City and external sections to the will and control of the Palestinians for this is what they call “east Jerusalem.”

What they are demanding is that Jews must give up everything that justifies our rights for being there, lending credibility to the Palestinian cause. What is incredible is that there are Jewish voices that support this notion. A culture of defeatism is being spread that allows the violent creep of Islam, dressed up in the Palestinian cause, to take over what is ours.

The message may be promulgated in political terms but what we are experiencing is nothing less than the significant march of Islam in the Middle East, and the Jews of Israel are its last bastion.

Barry Shaw is the Senior Associate on Public Diplomacy at the Israeli Institute for Strategic Studies.
He is also the author of “Fighting Hamas, BDS and Anti-Semitism.” www.barrysbooks.info