My Meeting with Kenneth Meshoe. 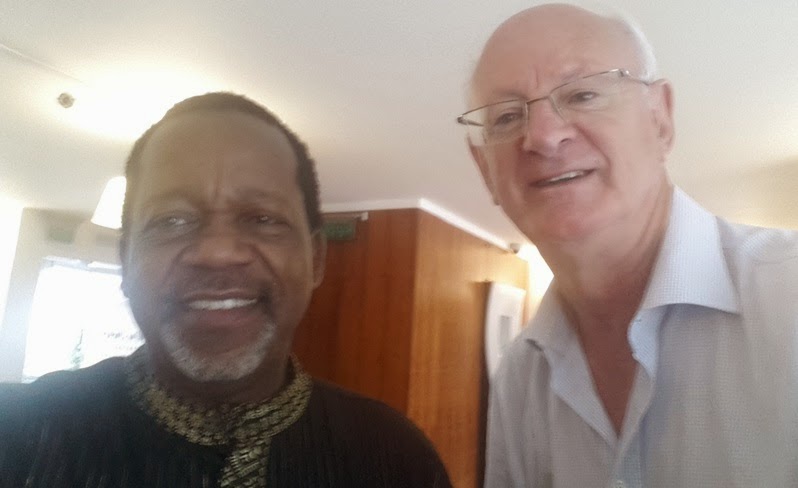 I met Kenneth Meshoe in a small hotel in a quiet street between Ben Yehuda and HaYarkon streets in the heart of Tel Aviv.
The clean, honest, and modest hotel matched the qualities of this charismatic leader of men in South Africa.

Kenneth Rasalabe Joseph Meshoe is the President of the African Christian Democratic Party that currently has three seats in the South African parliament. His party was founded in 1994 and it concentrates on social issues that affect many millions of black South Africans. The party’s platform is based on biblical values of reconciliation, justice, compassion, tolerance, peace and the sanctity of life, the individual, the family and community.

Kenneth Meshoe and his party are important for Israel if the Jewish state wants to gain any influence with a South African government, led by the ANC party, that has become increasingly hostile to the Jewish state.

Meshoe has argued against claims that Israel is an apartheid state, calling such accusations slanderous and deceptive. He insists these claims trivialize the word apartheid, and belittles the magnitude of the racism and suffering endured by South Africans of color during apartheid era.

Kenneth Meshoe is the Pastor of the Hope of Glory Tabernacle and is a passionate advocate for Israel. His strong stand for Israel has put him at personal risk. He receives threats. As he told me, he receives anonymous calls saying, “we know where you are, and we’re coming after you!” In a place like South Africa you don’t take these threats lightly.

I asked him why he fights so strongly for Israel in a difficult and dangerous environment. He answered, “The fight for the Jews is the fight for the Christians.”  He claims to represent Judeo-Christian values in his personal and public lives.

We discussed the denial of Jewish rights and legitimacy both by the Palestinian leadership and the anti-Israel lobby in his country. He referred to the many biblical references that point to the history and heritage of the Jews to the land. “If the Jews did not exist as written in the Bible,” he explained, “then the Bible is a lie. If the Bible is a lie then there is no God.”

I tentatively mentioned the anti-Israel words and deeds of Archbishop Desmond Tutu. I told him that I had written about Christian leaders such as Tutu and he agreed with me that Tutu follows to dogma of replacement theology. He smiled as I spoke of how the replacement concept of a God who changed his mind and deserted the Jews as the Chosen People in favor of Christians can be destroyed.  “A God who changes his mind once,” I told Kenneth, “is a God who can change his mind again. Surely in the ascent of Islam and the slaughter of Christians we are seeing their type of God deserting the Christians in favor of the Muslims. If that is their religious philosophy, their God has forsaken them” To press home my point I insisted, “We Jews do not believe in a God who changes his mind. What is written in our Bible is, as you Christians say, gospel – irrevocable.”

“I will make you into a great nation, and I will bless you;
I will make your name great, and you will be a blessing.]
I will bless those who bless you, and whoever curses you I will curse;
and all peoples on earth will be blessed through you.”

He confirmed that we are seeing this being played out in our times. Countries like South Africa who turn on Israel are in political turmoil. His country is under the influence of the BDS Movement and increasingly powerful and persuasive Muslim activists. We spoke about those who call to boycott Israel. He told me that “when people say ‘don’t go to Israel’ they do it because they are afraid that people will see the truth of Israel if they come.” That is why Meshoe says it is so important for people to come and experience Israel.

I asked him how he counters the boycott calls as a member of parliament. He gave an example in his countries major problem with pollution and sewerage which has become a health and environment issue. “Israel has the technology. Here it is recycled. Israel can help South Africa overcome this growing problem. The problem in my country is that politicians are putting politics before the people. This is wrong. My people’s health must come before politics.”

This is his cornerstone of his belief in Israel. It is also the foundation on which he hopes to build a larger political base for Israel in South Africa. There are many millions of bible-believing black Christians that have not yet been reached with the truth of Israel. “Christians are taught not to get involved in politics; that God and politics should be kept separate. So millions do not even vote,” he told me.

I suggested that the South African Jewish community should support Kenneth Meshoe. It is difficult, if not impossible, to see a party in South Africa that makes Israel an affirmative political platform, save for Kenneth Meshoe’s ACDP. One of the obstacles to further advancement for Meshoe is lack of funding. Although it is a Christian-based party, its principles are Jewish principles. Just as millions of black South African Christians are passionate supporters of the Jewish state, it is beholden on the Jewish community there to support Meshoe’s efforts to achieve a more powerful voice for Israel.

Barry Shaw is the author of ‘Israel Reclaiming the Narrative.’ www.israelnarrative.com  He is also the Special Consultant on Delegitimization Issues to the Strategic Dialogue center at Netanya Academic College.
Posted by Unknown at Friday, October 17, 2014