Europeans are lost in their self-made loop of political and security incorrectness. 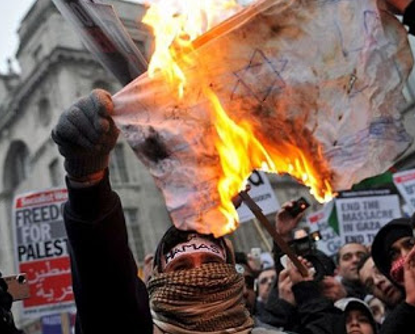 When European countries voluntarily surrender territory and control to a strong immigrant minority that, unlike the once immigrant Jewish community, refuses to integrate, you know that country is on its way to disastrous consequences and in Paris we recently saw where these consequences can lead.

One of those consequences is that, with rising anti-Semitism, a part of the intolerance of a growing intransigent minority, Jews are fearful, unsettled, and a growing number are packing their bags and leaving. This is a major loss to the host country as expressed by French Prime Minister, Manuel Valls, who said, “If 100,000 Jews leave, France will not be France.”

Politicians in other countries threaten that Jews cannot remain Jewish and also be members of their nations. This has been heard in Greece, Hungary, Sweden and other European countries.

In other cases, organizations and politicians have attempted to drive a wedge between their Jews and Israel. Perhaps the most notorious was the mayor of the Swedish town of Malmo who threatened his Jews with abandoning their support for Israel during anti-Israel demonstrations in his town. I named such a phenomenon, which has spread to places such as Britain and Ireland, as the “Malmo Symptom.”

This is a new form of anti-Semitism that targets the identity and sympathy of Jews to Israel, the Jewish state. We saw this with the Tricycle Theater in London who refused to host the UK Jewish Film Festival because the Jewish organizers were receiving partial funding from the Israeli Embassy. Jews in Britain, it seemed, had to decide if they were Jewish or pro-Israel. They couldn't be both.

Depressingly, the Malmo Symptom showed itself in the Irish Holocaust Memorial Trust which demanded that no mention of Israel or the Jewish state must be made in the upcoming Holocaust Memorial ceremony in February. Fortunately this was rescinded following widespread objections.

Jews in Europe feel a triple danger. They feel vulnerable to the anti-Semitic threats and insults from sections of the population, increasingly from the Muslim community. They feel that their political representatives are more concerned with the growing Muslim constituency and their pleas are ignored. They see this expressed in the anti-Israel, pro-Palestinian stance of politicians at local and national level.

They are justified in viewing this as a metaphor for their isolation within their own country. In both cases, European politicians seem to favor the Muslim side against the Jews in their words and resolutions. This increases the feeling of isolation and vulnerability of European Jews. Both they and Israel see Europe turning against them.

If European countries want to keep their Jews they have to improve their relationship with Israel. To understand the fears of Israel they need to understand the reluctance of Israel to take dangerous steps for peace against a threatening, anti-Semitic and violent Palestinian entity.

The similarities of what both European Jews and Israel are facing from incoherent and appeasing European politicians are too stark to ignore. Both Israel and European Jews have reached their tipping points.

Israel is not prepared to continue the impossible task of peace talks with a rejectionist, anti-Semitic, corrupt and violent adversary under unilateral pressure from a Europe that gives the Palestinians a free pass and an inordinate amount of funding. European Jews are not prepared to continue to quake in fear while their politicians are incapable of protecting them and they hear their politicians and media put mounting pressure on Israel, giving the Palestinians a free pass as they do with their intolerant Muslim population. In both cases, the one-sided approach of European countries has become too painful a burden to bear. Jews and Israel are objecting to this bias.

It is time for European leaders to reform their incorrect political thinking and give both Israel and their Jews a break which must include their full support. They must review their faulty policies. They must regain their domestic control, their political equilibrium, and see both their Jews and Israel through fresh eyes. Both are shining examples of enlightenment and liberal democracy and must be supported. The concerns of both must be taken on board as never before.

If pressure needs to be applied it has to be against the intolerant, rejectionist and violent part of the community. In Europe it is the section of society that refuses to integrate, rejects the norms of the host country and adopts violence. In the case of the Israeli-Palestinian conflict it is the side that rejects solutions and concessions, refuses to recognize the Jewish state and adopts violence.

Proof that both Israel and European Jews see things differently from European politicians is evidenced by the increasing number of Jews who are leaving their home countries in which they feel growing despair and hopelessness. They share the concerns of Israel in a dangerous Middle East and a failing and weakening Europe having experienced it firsthand in the countries of their birth.

Despite this, they find hope and protection in the strength and determination of the Jewish State of Israel, and many are finding redemption in a new life in a country that welcomes them with open arms.

Barry Shaw is a member of the Knesset Forum on Israel’s legitimacy. He is also the special consultant on delegitimization issues to The Strategic Dialogue Center at Netanya Academic College, and the author of ‘Israel Reclaiming the Narrative.’ www.israelnarrative.com