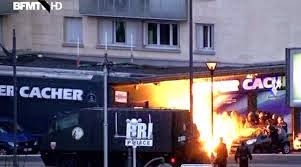 For French Jews, January 9, 2015, was Kristallnacht, a seminal watershed of no return.

That was the day that the Islamic fever that had infested France and most of Europe turned its fury away from attacking a satirical magazine that poked fun at them to its greatest enemy – Judaism.

In Paris, a gunman, linked to the perpetrators of the Charlie Hebdo massacre who had shot a policewoman in the back the previous day, selected a Jewish target for headline effect. He attacked the Hyper Casher Jewish supermarket gunning down four shoppers in his assault.

The French Jewish community had warned of their fears that the summer rise in anti-Semitic incidents were leading to deadly violence. At that time hundreds of Muslims, backed by radical leftists, had rampaged through the streets of Paris toward synagogues with fearful Jews sheltering inside. These Jews were the maelstrom of anti-Israel hate during the Gaza conflict that necessitated channeling its expression toward the local Jews.

Let’s be honest, Islamists hate Judaism in all its forms – Israel, Zionism, and, quite frankly, Jews.

The summer violence of 2014 led to a doubling of French Jews to Israel to escape the anti-Semitism of a Socialist France that neglectfully allowed the growth of radical Muslim activity and voice to dominate their society.

France ceded sovereignty to a growing Muslim community by allowing over seven hundred “no go” areas where Muslims are permitted to run their own affairs, including imposing Shariah law, and where French police do not tread for fear of violent reprisals.

When a sovereign state surrenders territory and control to an intolerant and rejectionist minority it has lost the battle for multiculturalism and enlightenment. This is when integrated minorities, such as Jews who contribute fully to the host country, feel isolated and exposed. For the power of the dominating minority, in Europe’s case the Muslims, will insist that the host country cede further to their will.

Liberal politicians and media talking heads bleat about that recent phenomenon of bloody terror on the streets of Paris has nothing to do with real Islam even as the perpetrators pronounce that this is precisely what their actions are all about. Go into any mosque preaching the concept of Dar ul-Islam (Land of Islam) over Dar ul-Kufr (Land of Unbelievers) and understand that jihad can be fought by deception or violence until Islam has succeeded and any land that is not Dar ul-Islam is Dar ul-Haab – a Land of War.

This is something that Israel and Jews are fully aware. Even in this they feel isolated as clearly liberal-minded Europe is still in denial. They have deliberately decided to wear blinkers for to see the truth exposes their wrong-headedness. They cannot admit that they have led their people into a dark cul-de-sac. Instead, they impose the notion of Islamophobia for anyone pointing out the error of their ways and the frightening outcome of their policies of open immigration, failed integration, and surrender of once-proud national values in favor of a multi-cultureless that brought masses of people who rejected their valueless society.

A reporter on the French news desk of i24 online Israeli TV news, who had closely followed events surrounding the attack on the Jewish supermarket, gave disturbing news that the general French feeling was that this terror attack had little to do with France. That it was a side issue between Arabs and Jews and did not affect them, as regular French folk, as did the assault on the offices of Charlie Hebdo. The French love and respect their satirical journalism a lot less than they love and respect their Jews.

The French have not yet grasped the reality that radical Islamic terror rooted in the Middle East, but nurtured by misguided politics on their own soil, may begin by targeting free speech, authority as personified by the fallen policemen and women, and Jews but, as with all totalitarian ideologies, it eventually targets everyone who do not bend to their will.

January 9 2015 should be a watershed date not only for the Jews of France, but also for Jews anywhere.  For, just as Kristallnacht targeted the Jews of Berlin, the sound of terror and broken glass were the alarm signals to Jews and civilization everywhere.

Barry Shaw is the author of ‘Israel Reclaiming the Narrative.’ www.israelnarrative.com
He is a member on the Knesset Forum on Israel’s legitimization, and Special Consultant on Delegitimization Issues to The Strategic Dialogue at Netanya Academic College.