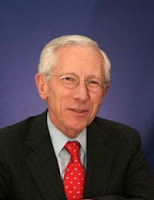 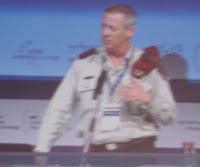 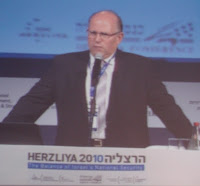 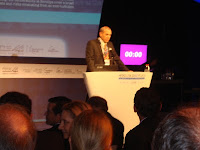 The subjects of this years Conference were broad and participants had to select which Plenary Sessions to attend as time restrictions over the four days meant holding seminars in various committee halls.
You will receive a daily report as I attend the main events.

The Opening, on January 31st, was chaired by DANNY ROTHSCHILD, the Director of the Institute for Policy and Strategy at the Interdisciplinary Center (IDC) in Herzlia who organise and host this major international event.

I had previously heard Rotschild address an audience at the AACI in Netanya years ago in which he offered his personal and professional assessment of the Palestinian Authority under Yasser Arafat.

He stated that he hoped the Conference would produce what he called the Herzlia Declaration which was to be a blueprint on how to tackle terror and warfare by non-state actors.

The initial speaker was UZI ARAD, the National Security Adviser to the Prime Minister amd Chairman of the National Security Council.
No national security or strategy meeting takes place without the input of Uzi Arad.
He outlined the obvious and main issues facing Israel in 2010. First and foremost is preventing a nuclear Iran. Diplomatically, he did not go into details that have not been covered widely in the media or open diplomatic circles.

The second issue of, of course, the peace process.
Here he declared his disappointment at the lack of progress. A year previously, Benjamin Netanyahu had addressed the 9th Herzlia Conference and outlined his 'bottom up' ideas of kick-starting a better future for the Palestinians by injecting finance and business that gave jobs and hope to the Palestinian population in the areas controlled by the Palestinian Authority from Ramallah.
Arad also outlined the gestures that the Israeli Prime Minister had offered in order to try and ignite negotiations. They included an acceptance of a Palestinian state in a 2-State solution, a ten month Moratorium on construction in the disputed territories, and a desire for peace talks.
All this had been rejected by the Palestinian leader Abbas who had earlier rejected the most generous concessions given to him by Ehud Olmert.
Arad told his audience that Abbas had told people that his rejection was'because the gaps were too great'.

Part of policy was also to look at regional alternatives and Arad praised GIOR EILAND of the NSC who had come up with various interesting alternatives to a 2-State solution including incorporating the Palestinians into a larger Jordanian Federation.

UZI ARAD warned about the difficult international campaign being waged against Israel. They included the inter-relations between governments and bodies against Israel in the media, legal, diplomatic, political, economic forums that do not have Israel's interest at heart.

Israel said, must adopt strategys to counter these moves and to strengthen the international ties in order to block these negative trends.
he pointed to several achievements including European countries such as Germany and Poland who had upgraded their relations with Israel. Italy's Prime Minister Berlusconi was to begin a significant visit to Israel this week.
Brazil, China, and India are countries that are warming in their relationships with Israel.

UZI ARAD also had positive news of the Israel's decision making process. From his personal experience, he declared, far reaching changes were taking place in the structure of Government decision making with the old triumverant of Prime Minister, Defence and Foreign Ministers being enlarged to incorporate what he called 'The Group of 7' that is six ministers plus the PM in a new Council of Ministers who meet frequently on strategic agendas. This, he said, had improved Israel's decision making process as the Council of Ministers included the broad spectrum of political parties within the ruling Government and, thereby, included the majority of the Israeli public.

It is also useful, said Arad, that this Council including two who had been Prime Ministers and Ministers who had served in previous Governments. This made for easier communication.

There was also a Political Security Cabinet with ah igh level of public concensus as it included politicians and experts of various subjects.
The National Security Council had moved from a marginal to a central position. This is the body that UZI ARAD heads and it strengthens the decision making process not just with policy but also with long term issues.

Arad gave an enigmatic response to the Goldstone Report. On issues such as this, he said, you can be smart and you can be right. You can appear to be clever but not do what is right.
He urged caution and prudence of Israel's political leaders. Less talk, less threats, and more modesty.
"Conduct policy quietly" was his concluding advise.

That may be why we see a less public Benjamin Netanyahu these days. The Israeli Prime Minister will address the Conference on the final day.

We were then treated to the perspective of BENNY GANZ, the Deputy Chief of Staff of the IDF who gave overview of a generally calm situation, militarily, that could easily explode at any minute.
"The Syrian arena is contained", he said. Lebanon is peaceful but with closer ties with Syria.
"There is no smuggling of arms from Syria into Lebanon. It is an open and regular supply", Ganz informed us.
The Southern Lebanese villages and north of the Litani have been resupplied with weaponry.
"Lebanon enabled this rearming and will be responsible when Israel is faced with the danger". Ganz used the word 'when' and not 'if'.

It has been a peaceful period with Gaza since Operation Cast Lead, but Hamas is smuggling arms and the situation is volatile.

The West Bank (my description) is peaceful post Operation Defensive Shield though sometimes terrorists do succeed in killing or injuring Israel. Ganz gave the latest example in the murder of Rabbi Shalom Hai.

The borders with Jordan and Egypt are peaceful. Egypt is acting against the weapon smuggling along their border with Gaza.
The smuggling begins in Iran.

Iran's long range missiles activities, its nuclear ambition, and its terror support is problematic.
Ganz warned that Irans nuclear technology may trickle down to terror organisations.

"The world cannot ignore the challenges we face today", he said.

Israel, and the world, face both regular and irregular warfare in a Catch 22 situation.
We have enemies that cynically take advantage of civilians in urban warfare. While fighting this type of enemy Israel has to take humanitarian elements into their planning.
"There has to be an international campaign", he said "to convince the world that our enemy is the aggressor but poses as a victim".

The Goldstone Report is a Trojan Horse, according to BENNY GANZ, that comes to the defence of terrorist activities by restricting the warfare against this enemy.
"Israel knows how to give the right answers", he told his audience.

He then exposed the fact that one of the leading Israeli doctors who saved lives and treated hundreds in the Haitian earhtquake had also participated in humanitarian medical work in Gaza during Operation Cast Lead.

BENNY GANZ concluded his presentation with a personal anecdote. He met an elderly Holocaust survivor during a tour of the southenr towns during the Gaza campaign. This survivor told Ganz "Don't stop supplying them with humanitarian aid, and don't stop fighting against their terrorists".

ISAAC HERZOG gave an impassioned plea to the Government of which he is the Minister for Social Services.
"The inequality in the social structure", he warned "will lead to an increase in violence in Israel".

Of the Israeli population one million two hundred thousand people are being treated by social services. Yet many are falling through the cracks.
Shortage of budget and manpower means not everyone in need can be reached. His department is challenged by the growing weight of numbers of those in need.
He pointed to recent cases of domestic violence. There was also te division between sharing the social benefits wth more equality between the Jewish majority and the Arab minority within Israel.

There are some positive pointers. Israel expects to be welcomed into the OECD but it is forced to close the socal gap before membership into the leading developed nations can be concluded.

An interesting guest speaker was DOMINIQUE STRAUSS-KAHNwho heads the INTERNATIONAL MONETARY FUND (IMF).
He outlined the surprisingly early recovery from the recent worldwide financial crisis.
"It has come sooner and faster than expected", he told us, "but its recovery is still fragile".
There are dangers. Public demand still outstrips the private sector.
There is growing unamployment worldwide.

Israel did exceptionally well. "The Government and especially STANLEY FISHER of the BANK OF ISRAEL can be congratulated", he said.

"Most of the problems prior to the crisi still exist today. As we exit the crisis do we stay the same, or do we alter the imbalances?" he asked.

"Householders must save", he said. "That should not be difficult, they did not save before!"

"Who replaces the American consumer? China? How long will it take for emerging consumers to take up the slack?"

"We avoided the Great Depression of 1929. We also somehow avoided conflicts that are borne out of economic crises and instability".

"Finding economic solutions are essential for peace, especially in this region. The IMF has the resources to help. Both Stanley Fisher and Salam Fayyad, the Palestinian Prime Minister both were in the IMF. We can play a role in the future of the region"

In introducing STANLEY FISHER, the Governor of the Bank of Israel, to the audience DR. URIEL REICHMAN hinted that Israel may be about to lose our national hero, as he called him, (I made Stanley Fisher my " Man of the Year " for 2009) to the IMF. He called on Fisher to put our national interests ahead of the IMF's world perspective by staying on with the Bank of Israel.

STANLEY FISHER told us that israel had exited the financial crisis relatively easily because we had entered it with a strong and flexible financial structure.
Israeli banks are in good condition. The financial strength helped the real estate sector.
It was clear to Fisher as earl as late 2007 that a breakdown was inevitable and the Bank of Israel decided to act in regulating exchange rates for stability of the local economy.
Fisher complimented the Israeli business people and employers for their behaviour during the world crisis.

Israel's financial strength also came about because of the strcit fiscal policies that led the Israeli Government to reduce its spending from 53% down to 44%.
We are close to a point where this is no longer sustainable as the Government must solve its social problems and invest in its infrastructure.

In looking forward Fisher predicted that the past 5% growth could develop into 6% and even 7% if the peace process can be improved.
Joining the OECD in four or five months will give Israel opportunities to attract even more investment.

A major concern to STANLEY FISHER is the bureacracy at local, regional, and national level.
In international surveys Israel comes out at or near the top on a lot of them. "However", he said, "the time it takes to build a shed Israel came 124th out of 150!" Bureacracy stunts growth and development and must be dealt with.

(I share Fisher's concern. My experience in Israeli real estate shows that obtaining planning permits takes forever. Often the builder is blamed but the fault is in local and national government bureaucracy.)

I was surprised that STANLEY FISHER agrees with the VOLKER PRINCIPLES that President Obama intends to introduce to limit the activities of American banks and includes preventing them from runnnig hedge funds at their expense.
He admitted that he was not yet clear about all the implications but he supported this type of change.

STANLEY FISHER hoped for a renewed peace process that could bring about an improved growth of up to 7% for Israel in the near future.
Posted by Unknown at Monday, February 01, 2010