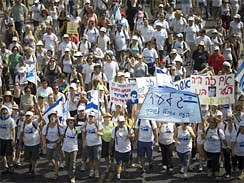 A busy day for the Shalit family. 15,000 people marched with them on a hot day through the streets of Tel Aviv to a rally in Rabin Square.
Noam Shalit, Gilad's father, declared that the situation of kidnapped Gilad Shalit is the only humanitarian problem in Gaza.

The Shalit's then travelled south to the Gaza border.  Here, they visited the location near Kerem Shalom where their son was overpowered and ragged across the border into Gaza by Hamas terrorists four years ago.
Kerem Shalom is the Israeli crossing point where hundreds of trucks bearing aid flow into Gaza every week.
It was this part of the border that Gilad Shalit was protecting when he was attacked and kidnapped by Hamas in 2006.

After visiting the border a special concert, emotionally entitled "A Cry to the World!", took place at Eshkol Park. The concert was conducted by Zubin Mehta and popular Israeli singer, Shlomo Artzi, was the highlight singer.

The agonising dilemma of Gilad Shalit was eloquently emphasised by Stewart Weiss of Raanana whose son, Ari, was killed in a battle with Hamas terrorists in 2002.
In an article headlined 'Why I'm not marching' Weiss wrote "If we march at all, we should be marching to the Gaza border to demand its complete closure until our boy is freed. We should march en-masse to the offices of the European Union to demand that it stop fueling terrorism by paying hundreds of millions of euros to the intransigent Palestinians. We should march to the Red Cross to demand that they stop providing services to the Arab world until pressure is put on Hamas to allow visitation by independent organisations.
Let us be perfectly clear.  Hamas has absolutely no humanitarian interest is seeing its prisoners freed. It would just as soon let them rot until their deaths in Israeli prisons. It often proclaims that this would be a good thing as it would ensure their saintly rewards as martyrs to Allah.
No. Hamas has one objective only. That is to bring Israel to its knees and cause its complete collapse.

Each day, in my morning prayers, I ask God to protect our soldiers and free Gilad Shalit. As the bereaved father of a brave IDF sergeant how could I not? I consider every Israeli soldier as a holy messenger of the Almighty and a hero of the nation, prized above all others. While I desperately want Gilad to come home it cannot be at any price. It cannot be at the cost of endangering our entire nation.
That, tragically, would be a march to madness.

This emotional rawness exposes the painful anguish of the Israeli public and its leadership as the GILAD SHALIT FREEDOM MARCH wends its way to the office of Israel's Prime Minister in Jerusalem.
Posted by Unknown at Monday, July 05, 2010