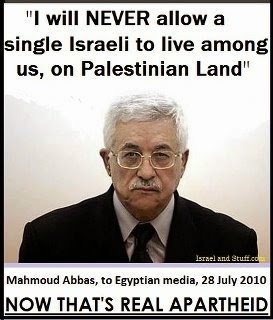 Simply put, he like Hamas, he like the wider Islamic world, advocates, educates, and incites for a Greater Palestine.

The fault line is not a resolute Israel rejecting peace. That notion is untrue. Rather it is a rejectionist Abbas that incites for a state without Jews and a world without a Jewish state, an Abbas who partners with the deadly terror regime of Hamas.

Based on this harsh truth why would it be right to demand of a nation, to make drastic territorial concessions, even into the streets of Jerusalem, its capital city? Does this make any sense to any reasonable person? But this is what is being demanded of Israel.

The world is better advised to support Israel’s vital security needs, to see the dangerous character of a devious Palestinian leadership that says one thing to the international community, and something completely different to its own people. Indeed, the major partner in a Palestinian unity government openly tells the international community that its aim is the eventual annihilation of Israel and the murder of Jews. It states it clearly in its founding charter.

It is here that the fault lies, not in the liberal democracy that is Israel.

Barry Shaw is the author of ‘Israel Reclaiming the Narrative.’ www.israelnarrative.com