UK's Yachad, Jerusalem, and the consequences for Judaism. 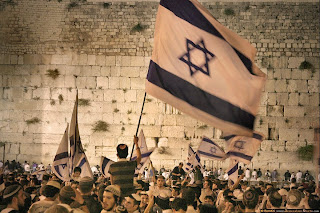 The Yachad platform of supporting a Two-State Solution is not a fluid amorphous position.
The majority of Israelis are pro-peace and support the rights of Palestinians to a state of their own. Even our Prime Minister, Benjamin Netanyahu, publicly supports the notion of Two States for Two Peoples.

The problem is agreeing where that Palestinian state should be based. It is here that the likes of Yachad become dangerous mixers in a delicate battle for rights and legitimacy.

According to them Israel has no legitimacy beyond what are considered 1967 borders. You can see evidence of that in their references to “illegal settlements” and “occupied Palestinian land.”

Once Yachad establishes that Israel is illegal beyond 1967 lines they also define east Jerusalem, with its centrality to Judaism, as illegal.  They make great issue of the “crime” of Jews buying and living in Jerusalem locations that were once Jewish, places like Shimon Hazadik with the tomb of Simeon the Just, and in Silwan which was once the residence of Yemenite Jews before they were driven out of their homes by the Arabs and Jordanians. They would stop the excavations in the City of David just outside the walls of the Old City, excavations that prove the Jewish history, heritage and construction of ancient Jerusalem.

East Jerusalem includes the Old City of Jerusalem. In real estate terms, according to Palestinians and Yachad, properties such as the Hurva Synagogue, David’s Tomb, the Western Wall, the Temple Mount, the Mount of Olives, even the Rockefeller Museum, Hadassah Hospital, and the Hebrew University are located in “Palestinian” east Jerusalem.

This surely must outrage all British rabbis, and you.  Yachad ignores Palestinian voices against Jews, Jewish heritage, belonging and legitimacy in pursuit of a solution that brings doom to Jews and Israel. Yachad would sell our birthright cheaply to appease Palestinian demands in the name of peace and in the name of being pro-Israel.

Under a Hamas-led Palestinian Jerusalem, will Jews once again be forced to pray towards our Temple Mount from outside the walls of the Old City as we were forced to do by the Jordanians between 1948-1967?

There is much much more that is abhorrent about Yachad’s platform against Israel. But this central issue of Jerusalem exposes for rabbis, and anyone truly caring about the defense and significance of the Jewish state, the core reason why Yachad cannot be the official voice of the British Jews.

The depth of this issue is that once Jews have relinquished ownership and legitimacy to the land, relinquished the centrality of our Jewish heritage and treasure  in Jerusalem to Palestinians, then all that is left is a rump secular state that, according to ongoing Arab ambitions is the remnant of a Palestine which belongs to them and must be liberated by them. At such a time it will be tenuous for Israelis to claim that the majority of its people are Jewish. We would, by then, have surrendered our soul.

The Palestinian leadership already call Israeli Arabs “the Palestinians of the Interior,” and they intend to come and liberate them and to reclaim the holy towns of Jaffa, Haifa, and the Galilee.

What then, Yachad? What then, rabbis who support Yachad?