The Lies of Ahmadinajad (Part 2) 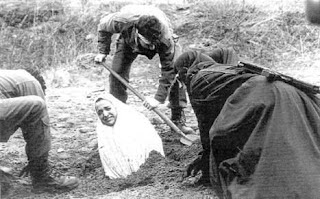 Ahamdinajad lies about women in Iran.

"The rights of all human beings should be respected!"

"Freedom in Iran is genuine freedom!"

"Women are respected in Iran!"

These are just three of the statements made by the Iranian President as he stood before the students of Columbia University.

They were not received by the laughter and jeers that met his remarks about Iran being a 'gay-free' country.
They were, however, equally untrue, and equally dangerous remarks.

Only women who have escaped the tyranical regime in Tehran can freely disclose the oppression suffered by women in this Islamic republic.
Family honor killings are justified according to Islamic Sharia law. But regional and state legislated public executions are also permitted against women.

In Iran, a man's indiscretions may go unpunished. But a woman's indicretions carry the risk of family killings or even state-ordered executions, including public stoning to death.

The attached picture depicts an Iranian woman being buried alive prior to being stoned to death as a standard Islamic religious practice in Iran.

The aim of Columbia University of inviting Ahmadinajad was nothing more than one-upmanship on other campuses. They claim it was done in the name of free speech. However, this exercise in academic ego will have dangerous repercusions inside Iran and in the region.

Giving him the stage, and a worldwide audience, has been a dangerous disservice to those who oppose this perverted petty dictator.
Allowing him the freedom of speech has played into the hands of state-run Iranian TV who can now edit his speech and falsely project this oppressive tyrant as a world statesman to his own people.

Columbia University has set back the internal revolt against this man's tyranny for many more years to come.
Posted by Unknown at Thursday, September 27, 2007