Seven Israeli Arabs affiliated with al-Qaida and Global Jihad have been arrested for allegedly murdering a taxi driver last year, and carrying out a series of terrorist attacks, the Shin Bet (Israel Security Agency) revealed on Monday.


In a joint police-Shin Bet operation, Ahmed Ahmed, 21, Jalib Janam, 26, Wassim Allam, 23, Khidar Ziddana, 22, Ahbed Abu-Salim, 19, Adi Azzam, 23, and Oman Kakhibi, 22, all Nazareth residents, were arrested between May 11 and June 21. All seven were indicted Monday at the Haifa District Court.

Dep.-Cmdr. Avi Elgrisi, Head of Amakim Police's Central Unit told The Jerusalem Post that "this is one of the most dangerous cells we have uncovered." The investigation was initially focused on two suspects, before being widened to include a total of seven suspects, he said, adding that police are expected to make more arrests in connection with the investigation.

The seven said that they founded a group called Aljahabiyya and claim to follow Salafism, an extremist Sunni Islamic movement. Aljahabiyya was formed two years ago, and inspired by and affiliated with al-Qaida and Global Jihad. The group underwent a process of radicalization, using material found on the Internet, including pictures of weaponry and instructions to prepare explosives and perpetrate terrorist attacks. The seven downloaded al-Qaida propaganda movies and speeches by Osama Bin Laden.

"They accessed the Internet for jihadi ideology and indoctrination, and used it as an information source to listen to extremist clerics," Elgrisi said.

The group allegedly carried out attacks to avenge the murder of Arabs by Jews in Israel, and confessed to plotting to kidnap IDF soldiers and take their weapons.

Ahmed, Janam and Zidanna were involved involved in the murder of taxi driver Yafim Weinstein, who was killed on November 30, 2009, as well as other attacks. In their interrogation, the three confessed to ordering Weinstein to a kibbutz near Nazareth, where one shot the taxi driver, and others assisted in destroying evidence. They reenacted the murder and led investigators to the place they hid the murder weapon used to kill Weinstein.

Weinstein, 54, a Nazareth Illit resident, was found murdered in his cab outside Kfar Hahoresh in November, leaving behind a wife, children and a grandchild. Details of the investigation were under a gag order until Monday morning.

The Shin Bet also found that after the murder, Ahmed and Janam attempted to travel to an al-Qaida training camp in Somalia to join the fighting against the Christian "heretics" as well as against the US, but were barred from entering Somalia at the Kenyan border.

Three others planned to kidnap a Nazareth resident and behead him on video, but did not do so. Elgrisi said that they had even dug a grave for the Christian man who "insulted the prophet Muhammad."

The men also threw stun grenades and Molotov cocktails at Jewish- and Christian-owned businesses and homes in the town. They burnt Christian tour buses, and dealt in arms.

They also stabbed a pizza delivery man in Nazareth Illit, stealing his scooter and NIS 100.

"On the criminal front, we are searching for criminals who sold weapons to the suspects," Elgrisi said. "Security suspects will also be arrested."

In April 2009, Elgrisi led an investigation into a terror cell made up of six Israeli Arabs and a Beduin from the North who had reached an advanced stage in their plot to carry out an attack on Israelis.

The cell had prepared several explosive devices and simulated the kidnapping of soldiers while engaging in Internet communications with a terror operative based in Gaza, known as "Abu Kassam." 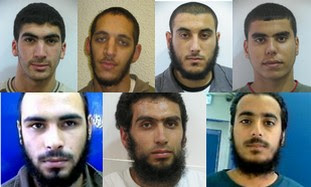 The cell filmed their preparations, Elgrisi said last year, adding that in one exercise, a cell member pretended to be an IDF soldier while the remainder of the group practiced abducting him.
Posted by Unknown at Monday, June 28, 2010