When will CNN be fair and balanced? Answer - never! 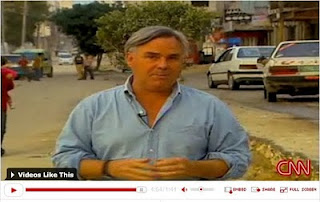 See Ben Wedeman do his perpetual Palestinian spin this week on CNN?


During his report on the poverty in Gaza, a discerning viewer could glimpse the new apartment blocks and the cars on the streets. Add to this the Olympic-sized swimming pool, the cuisine dining at Roots and Greens, the new streets and squares named after Palestinian terrorists and suicide bombers, the 200,000 laptops delivered to kids in Gaza, windsuring on the Mediterranean, and life isn't really that bad in Gaza after all.

But Wedeman searches for hard luck stories. We have them in every city, Ben. Get real.

Billions of dollars, Euros, Sterling, as well as hundreds of tons of aid are being pumped into Gaza - and Wedeman still calls it a humanitarian crisis.

When can we expect to see some professional investigative reporting from him about the high living in Gaza, as well as the parallel brutal Islamic Hamas thuggery that is called governance?

I promise that Ben Wedeman would not risk doing some honest reporting from there. I recall his remarks when British reporter Alan Johnson was kidnapping in 2004. Wedeman said it gave him the chills.
Wedeman does feel those chills now that GILAD SHALIT has endured 4 years of solitary confinement in a Gazan dungeon. Neither has he pursued this story. No investigative reporting about Gilad Shalit for CNN's Gaza-based Wedeman.
Clearly the chills have persuaded him that it is not a human interest story out of Gaza that will play well - for him and his career.

CNN was the subject of a concerted campaign to have them thrown out of Israel following an outcry in 2002. Ruth Peled and her 14 month old grand-daughter, Sinai Keinan, were blown up at a Petach Tikva ice cream parlor by a Palestinian suicide bomber.
CNN came to interview Chen Keinan who had just lost a baby daughter and a mother to Paslestinian slaughter. They also interviewed the mother of the suicide bomber.
That night, they decided to air the interview with the terrorist's mother.
The CNN switchboard was jammed, as was that of the Israeli Government by thousands of protesters demanding the exit of CNN from Israel.

More recently CNN, in their usual knee-jerk jump to judgment against Israel claimed that Israel had killed peace activists aboard an aids ship.  Investigative reporting would have shown them that these 'peaceniks' were all members of the extreme Islamic terror sponsoring IHH, based in Turkey.

Ben Wedeman has enjoyed a happy career being a Palestinan spokesman. It keep him safe from the fear of chills.
Posted by Unknown at Friday, June 04, 2010