BRITAIN TO BE SUED FOR CONTRIBUTING TO THE HOLOCAUST. 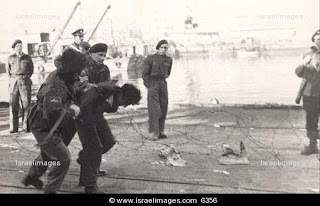 An interesting story is breaking in Israel.
A group of Israel-advocacy activists are bringing a class action law suit, on behalf of the families of European Jews who perished in the Holocaust.
The interesting aspect is that it is being brought against the British government for 'increasing the scale of the Holocaust'.
Their legal action is based on the tens of thousands of Jewish refugees who were prevented from reaching shelter in the then British-controlled Palestine by the actions of the British navy and army, acting under orders of the British Government.
British policy was to restrict immigration into Palestine. The British sent escaping Jews back to Nazi-occupied Europe where the majority were murdered. This heinous act was depicted in the book/movie 'Exodus'.

The groups researchers say that their evidence shows that up to 30,000 Jews trying to reach Palestine were forced back, by the British,  into the arms of the Nazis.
For these Jews, Palestine was the nascent state of the Jewish people, though mandated by the United Nations to Britain.


Tal Tamerin, the lawyer representing the group, will hold a press conference this week from Atlit, site of a British detention camp in Israel.
She will say that the case will be for British recognition of their role in this tragedy and not for damages.
Posted by Unknown at Saturday, August 21, 2010