ISRAEL IS LEARNING TO FIGHT - UNDERGROUND. 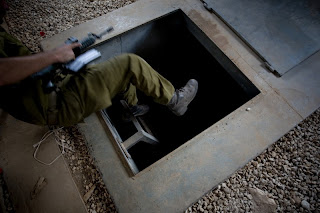 Israel's IDF, out of sheer necessity, is at the cutting edge in the war on terror.


From fighting tactics in urban areas, inventing gadgets that can see round corners or through buildings to pilotless drones now widely employed in Afghanistan, Israel leads the field in close combat warfare against a terror enemy that hides among a civilian population.

The IDF have discovered that tunnels in Gaza are not only used to smuggle weapons into the Strip. They have been constructed to coordinate and move terrorists between buildings and neighbourhoods.
Hizbollah in south Lebanon have built so many underground passageways that the IDF assess that their length surpasses the distance of the Paris Metro system.


The tunnels have been built under the noses of 12,000 UNIFIL soldiers airlifted into Lebanon, after the last war against Hizbollah, to prevent such provocation.
These tunnels, with reinforced bunkers, have been built to avoid aerial attack and to complicate any ground assault.

According to the IDF one southern Lebanon civilian town of Khiam has twelve arms warehouses and three command posts, all interconnected with underground passageways.
In another, Aita al-Shaab, one southern building houses mentally handicapped children. It is also a Hizbollah forward lookout post.

The IDF are readying to contend with fighting in the confined and dark underground warrens that link command and control centers to outlying defense or attack posts in other civilian buildings.

Dangers are numerous. These tunnels will contain explosive materials, will include booby traps and ambush points.
The Israeli soldier, however, has no other option but to prepare himself for the next round of grim fighting against an enemy in Lebanon and in Gaza in a network of underground tunnels.

This may be the future new battleground in Israel's ongoing battle against Islamic terrorism.
Posted by Unknown at Saturday, September 04, 2010