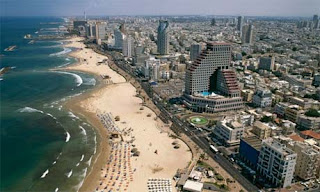 Lonely Planet is the largest travel guide book publisher in the world.
This week Lonely Planet released its list for travelers of the world's 10 best cities to visit.
Tel Aviv placed third. Not a surprise. Tel Aviv is an exciting, beautiful flower of Western culture on the Mediterranean Sea. It is a place of freedom, fun, and civility in which alternate lifestyles flourish alongside traditional.

The story, as reported by Israel21c, said

...Israel's party capital won praise for its tolerant attitudes and thriving gay culture and Lonely Planet also says "Thanks to its university and museums, it is also the greenhouse for Israel's growing art, film and music scenes."

"Scratch underneath the surface and Tel Aviv, or TLV, reveals itself as a truly diverse 21st-century Mediterranean hub. By far the most international city in Israel, Tel Aviv is also home to a large gay community, a kind of San Francisco in the Middle East," Lonely Planet says.

This summer, the prestigious National Geographic Magazine named Tel Aviv as one of the world's top ten beach cities, dubbing it "Miami Beach on the Med." It was also voted the third best city in Africa and the Middle East by the New York-based Travel + Leisure Magazine, and also one of the world's top "Party Cities" by Forbes Magazine and the Lonely Planet Travel Guide, and was included in the Louis Vuitton 2010 European Cities Guide.
Posted by Unknown at Wednesday, November 03, 2010