BREAKING NEWS OF THE ANTI-ISRAEL FLEET OFF THE COAST OF GAZA. 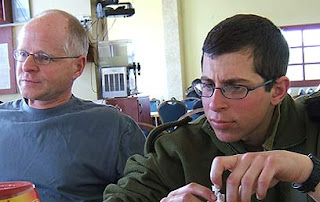 The parents of kidnapped Israeli soldier, Gilad Shalit, isolated in Gaza by Hamas for four years, offered to support the Free Gaza flotilla if its participantsa would demand that Hamas allow the various human rights organisations to visit their son and permit him to receive aid packages.

The members of this campaign refused!

And you thought they were human rights activists...

Attorney, Nick Kaufman, approached the Free Gaza movement with the request on behalf of the Shalit family. It was turned down.

"I thought this movement supports human rights. It seems that it is only interested in provocation and support for a terror group that doesn't really care about human rights".

Gilad Shalit was captured four years ago and dragged across the Israeli border into Gaza. The Hamas terror regime has refused to allow any contact with him, and have even barred the Red Cross from checking on his condition.

As I said in my earlier reports, this is not a human rights exercise. It is blatantly a HATE ISRAEL campaign, and solidarity with an Islamic terror regime.

Barry Shaw
The View from Israel
Posted by Unknown at Thursday, May 27, 2010