House demolitions - things are never as you expect them to be. 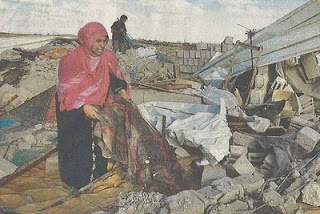 Look hard at the picture. Isn't this the image you are familiar with?

Twenty Palestinian homes destroyed. The reason given by the Government is that they were built illegally.
Another one hundred and twenty are due to be demolished for the same reason. The twenty destroyed houses were home to one hundred and fifty people.  Most of the inhabitants were poor.
The residents had been asked to ,eave and, when they refused to do so, the Government evicted the people and bulldozed the homes to the ground.

Meanwhile, hundreds of Palestinians are homeless and Hamas and the Palestinian Authority get a free pass by the 'Get Israel' mob.
Posted by Unknown at Sunday, May 23, 2010