THE HUMANITARIAN CONDITION IN THE GAZA STRIP -THE OFFICIAL VERSION. 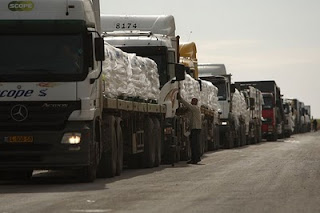 
1. Since Hamas seized power in the Gaza Strip, it has politically institutionalized radical Islam in Gaza. Hamas, supported and funded by Iran, denies Israel's right to exist and continues to build up its weapons
stockpiles so as to continue attacking the Israeli civilian population.

Since 2010, 140 rockets and mortars were fired at Israel from the Gaza Strip.

2. Hamas uses all means available to smuggle weaponry into Gaza.

Whether they are using smuggling tunnels or fisherman boats, Hamas is constantly trying to smuggle in missiles, launchers, guns, explosives and materials for building weapons.

3. IDF operations in the Gaza Strip, including the maritime closure and crossing restrictions, arise from the need to maintain the safety of the citizens of Israel from the terrorist threat in the Gaza Strip and to prevent weapons smuggling.

4. The Ministry of Defense and the IDF allow the crossing of goods and equipment in a routine and frequent manner, and enables the transfer of people for medical, religious, welfare, business or diplomatic reasons.

5. This summary provides facts and figures, which contravene the claim of a "humanitarian crisis" in the Gaza Strip.

1. Most types of food are allowed into the Strip, and are transferred by the private sector or by international organizations.

2. During 2009, 30,920 trucks containing 800,000 tons of supplies were transferred into Gaza. This included fruits and vegetables, meat products, poultry and fish, dairy products, sugar, rice and legumes, flour and yeast,

oil, and more. Furthermore, 10,871 heads of cattle were transferred for the Muslim holidays of Ramadan and Eid al-Adha.

7. In the first quarter of 2010 (January-March) 1,068 tons of medicine and medical equipment were transferred in 152 trucks.

8. In 2009 two elevators were transferred to hospitals in Gaza, as was a CT imaging system (to the Red Cross hospital), and equipment for a mammography machine (which checks for breast cancer).

9. During the first quarter of 2010 four trucks with special supplies for a project of the "Al Quds" hospital were transferred to the Gaza Strip, and an additional 13 trucks are scheduled to cross.

10. Due to fears of a swine flu outbreak, three Israeli hospitals were assigned to treat cases in the Gaza Strip and 44,500 immunizations were transferred to the Strip.

1. 14) Throughout 2009 Israel transferred 41 trucks of equipment for the maintenance of the electricity grid, and the state continues to provide approximately 60% of Gaza's electricity.

3. 16) In 2009 127 trucks containing more than 3,000 tons of hypochlorite entered the Gaza Strip for water purification purposes.

Moreover, 48 trucks of equipment for improving the sanitation infrastructure led to a substantial reduction in the Beit Lahya facility's waste levels.

4. 17) As part of the preparations made for winter, 3,607 tons of glass were transferred to the Gaza Strip. According to UN reports, windows in all education and health institutions were repaired.

250 trucks with equipment for the UNWRA summer camp, including:

· Seven trucks with equipment for upgrading the sewage pumping station, which was carried out by UNWRA.

· 74 empty containers for UNWRA for use in classrooms and bathrooms

6. 19) Certain types of materials, such as cement and iron, are more restricted. These products are openly used by Hamas for developing its arsenal, building bunkers and launching sites, and making rockets and
mortars.

7. 20) Despite the risk, the transfer of these items is also permitted under supervision, once it has been cleared that these materials are for civilian purposes only. Already in the first quarter of 2010, 23 tons of
iron and 25 tons of cement were transferred to the Gaza Strip.


IV. Movement of Residents in and out of the Gaza Strip

1. Despite the inherent dangers involved, Israel permits Gazans and visitors to travel between Gaza and Israel, from Gaza to Judea and Samaria, and even abroad for medical treatment, religious pilgrimages, and business trips. Whenever possible Israel allows for diplomatic activities and trade and commerce with the Gaza Strip.

· Education, Vacations and Pilgrimages to Holy sites: 147 permits were given to Palestinian students for academic studies around the world.

During the Christmas holiday approximately 400 permits were given to visit Bethlehem from Gaza as well 100 permits to travel abroad.

· Business: 257 permits were given to businessmen from Gaza to facilitate business operations.

· Sports: Special permission was given to Gazan footballers to train in Judea and Samaria and compete in international matches abroad.